Sisupalgarh is situated in vicinity of Bhubaneswar and is famous for its early historic period fortified city covering an area of around 1.2 km2. This pre-Christian era fort is in shape of a rough square. The name, Sisupalgarh, immediately warrants an association with Sisupal of Mahabharata, however it is not the case. Also it is not derived from Sisupal Kesari of the Kesari dynasty.  About the etymology of the name, it seems to been derived from a small village Sisupal, located in the eastern sector of the fort. However, this name is not known from any epigraph of that or later period. Toshali of Ashoka and Kalinganagara of Kharavela are identified with the fortified town of Sisupalgarh, thus these would be the name by which this locality might be known during that period.

The first excavation of the site was carried out by B B Lal1 of Archaeological Survey of India (ASI) in 1948. The excavation continued in 1949 and an interim report was published in Ancient India vol. V in 1949. The full report never got published. B K Thapar, who also took part in previous excavations, did the third season of the excavation in 1950. His excavation report was also not published. In 1966, the Orissa State Department of Archaeology did a small clearing operation around the gateways. M L Smith of the University of California carried out a systematic surface survey program in 2000-03. The main purpose was to document the surface finds. The last efforts were in form of a joint excavation project by R K Mohanty (from Deccan Colleage),  M L Smith and ASI in 2005-07.

The above excavations and surveys have revealed that Sisupalgarh was a well-planned and densely populated site. The site is in form of a fort, in shape of a rough square, and was enclosed within a perimeter with eight equally-spaced gateways, two on each side, around the periphery. One gateway exposed during the 1948 excavation revealed a main passageway 7 meters wide with two restricted entry points with door sockets, along with staircase leading to top of rampart. Though the fort occupied a considerable area, it only had royal palace and attached residences. A considerable part of the population was living outside this fort.

The fort was circumscribed by a small rivulet named Gangua (old Gandhavati). Excavated water reservoirs and pillared mandapas were found inside the town. Lal mentioned a group of sixteen monolithic pillars, locally known as ‘Solakhamba’, some survived only with their stumps in situ. Lal did not carry out excavations around these pillars and suggested that these would have comprised a pillared hall. Later excavations around this pillared area revealed presence of an apsidal monastery. Geographical surveys have suggested presence of broad streets connecting each of the eight gateways of the enclosure wall. 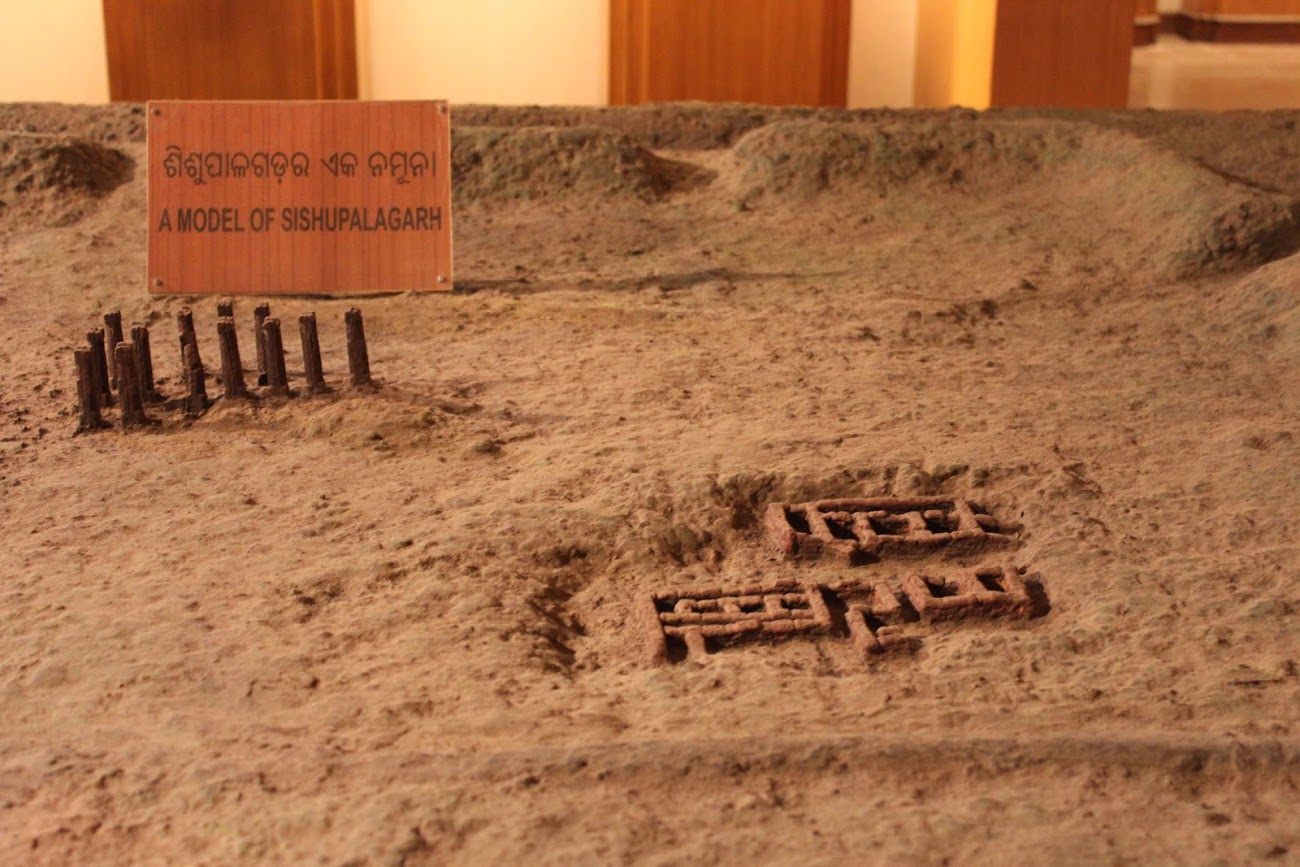 A rare find from Sisupalgarh is an Orissa-Kushana gold coin which imitates the Kushana motif of king standing and offering oblations on an alter on its obverse and a Roman head on its reverse. Till the discovery of this coin, such coins were not known. The name of the issuer is not completely legible, Altekar2 proposed the name as Dhamadamadhara (Sanskrit – Dharma-dama-dhara). Altekar mentions that a Orissa king imitating a Roman head may appear  strange however such imitations are known from north as well as south Indian territories. The date of the coin would be after Vasudeva (200 CE) but earlier than Chandragupta I (320 CE). 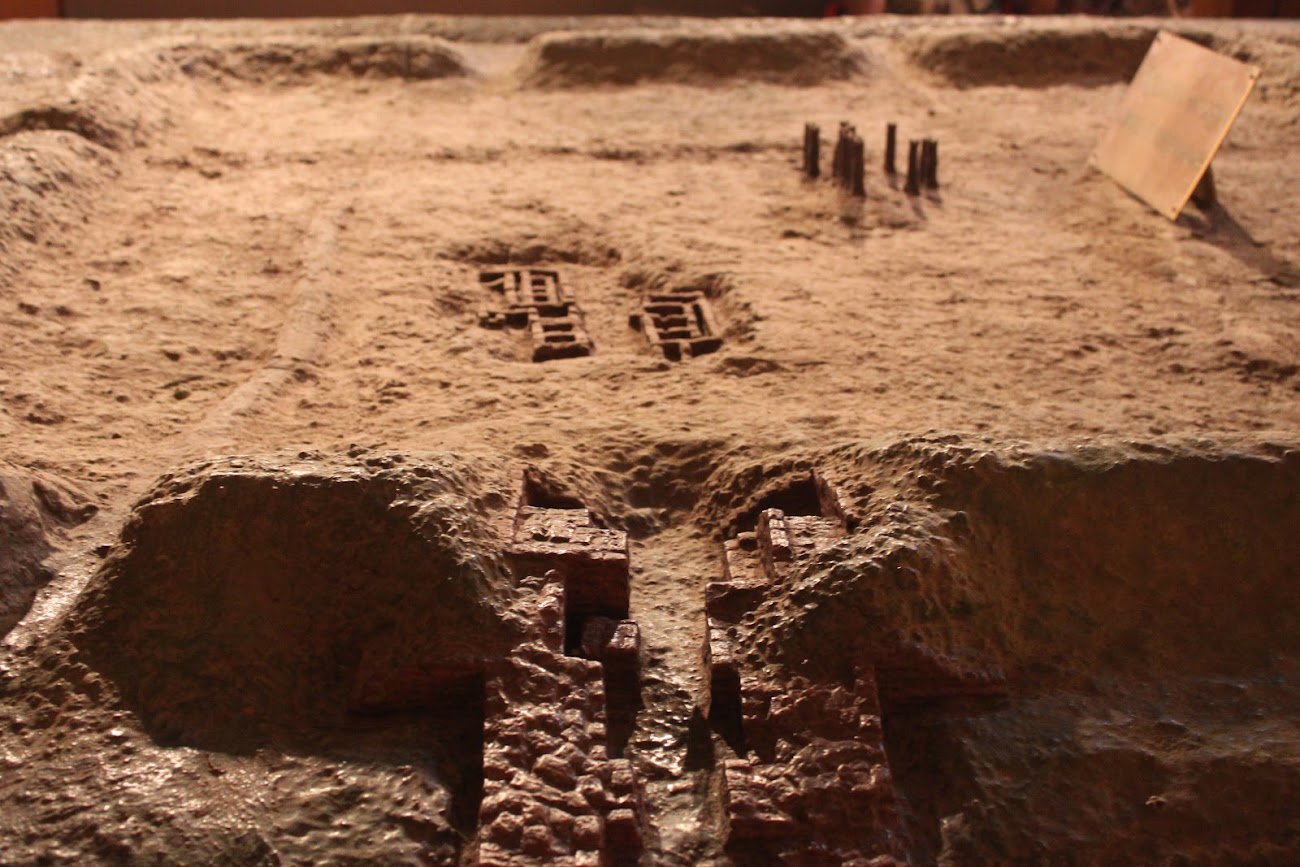 Lal assigns the early period of the site between 300-200 BCE. This early period dating is highly dependent on the rouletted-ware found at the site and comparison of the same with the findings from Arikamedu. A K Nayak3 mentions that this early period can be pushed back to 500-200 BCE as suggested by Allchin. Around 3rd-4th century BCE, the population of the town is estimated around 25,000. Volume of pottery findings at the subsequent later period is very much reduced suggesting a gradual shift from the site to the rise in new habitations in vicinity, i.e. Bhubaneswar. The last occupation at the site is suggested to be around 6th-7th century CE.

The current state of the site is very much threatened from the land grabbing activities and encroachment. The nearby city is expanding and thus there is a great demand of land. Sisupalgarh lacks security as well as will from the law enforcers which had put the site into its current state. The central sixteen pillars are no more standing. The north-west gateway which was excavated by B B Lal now lies in dilapidated condition, soon be ready to disappear. Sisupalgarh has very unique position in Odishan as well as Indian history, and protection of this site will be in interest of each citizen. I hope the concerned authorities will pay due heed toward conservation of this excavated site.