Commemorative Edict I or Rummindei Edict 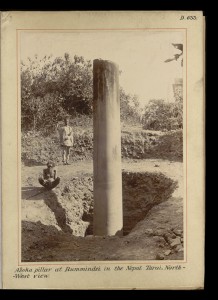 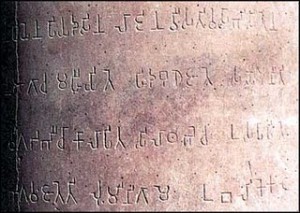 1. Piyadassi, the Beloved of the God, twenty years after the consecration
2. Has come to this land in person as Buddha; the Sakya-sage was born here, on this earth.
3. He raised here a stone-pillar made by (stone-carpenter) sculptors
4. Here the lord was born; therefore the taxes of Lumbini village, up to eighth (share) has been exempted.

English translation by V A Smith

By His Sacred and Gracious Majesty the King when he had been consecrated twenty years, having come in person and reverence having been done inasmuch as: “Here was born Buddha, the sage of the Sakyas ” a stone bearing a horse was caused to be made and a stone pillar was erected. Inasmuch as ” Here the Holy One was born,” the village of Lummini was released from religious cesses and required to  pay  [only]  one-eighth as  land revenue.

King Priyadarsin, Beloved of the gods, when he had been consecrated twenty years, came in the person and did worship. Because here the Sakya sage, Buddha, was born, he caused a huge stone wall to be made and a stone pillar to be erected. Because here the Blessed One was born, the village of Lummini was freed from religious cesses and made to contribute one-eighth share (only, as land revenue).

by His Sacred and Gracious Majesty the King, consecrated twenty years, coming in person, was worshiped (this spot), in as much as here was born the Buddha Sakyamuni. A stone bearing a figure was caused to be constructed and a pillar of stone was also set up, to show that the Blessed One was born here.
The village Lummini was made free of religious cesses and also liable to pay only one-eighth share (of the produce).

Twenty years after his coronation, king Priyadarsi, Beloved of the Gods, visited this spot in person and offered worship at this place, because the Buddha, sage of the Sakyas, was born here. He caused to be built a stone wall around this place and also erected this stone pillar to commemorate his visit. Because the Lord Buddha was born here, he made the village of Lumbini free form land revenue and subject to pay only one-eighth of the produce as tax instead of the usual rate.

Twenty years after his coronation, Beloved-of-the-Gods, King Piyadasi, visited this place and worshipped because here the Buddha, the sage of the Sakyans, was born. He had a stone figure and a pillar set up and because the Lord was born here, the village of Lumbini was exempted from tax and required to pay only one eighth of the produce.

Visit to Lumbini – This edict is a prove that Ashoka visited the village of Lumbini, the birthplace of Buddha. This edict also approves the legend mentioned in Divyavadana that Ashoka set out on a pilgrimage tour to visit Buddhist sites with his preceptor Upagupta.

Ashokavadana, a Sanskrit work, mentions that Ashoka, under the guidance of his preceptor, Upagupta, visited in succession the Lumbini garden, Kapilvastu, Bodhi-tree at Bodhgaya, Rishipattana or Sarnath, Kushinagar, Jetavana monastery at Sravasti, the stupa of Vakkula and the stupa of Ananda.

V A Smith mentions that the Buddhist preceptor Upgaupta might be a real historical personage as a famous monastery bearing his name was situated at Kankali Tila in Mathura. His name was also associated to many stories in Sind. Upagupta was the son of Gupta the perfumer. The place of Upagupta was taken up by Tissa in Sri Lankan chronicles, which as per Smith was a fictional person.

Silavigadabhi (सिलविगडभी) – This phrase has been differently translated by different scholars.

Back to Main Page

The Mauryas – Ashoka the Great