Chhattisgarh (छत्तीसगढ़) state is very rich with places associated with Ramayana (रामायण) and Mahabharata (महाभारत) epics. Shivrinarayana (शिवरीनारायण) town has been associated with Shabari (शबरी) of the Ramayana epic making it an important pilgrimage site among the Hindus. Being situated at the confluence of rivers, Mahanadi (महानदी) and Jonk (जोंक), its sanctity is further enhanced. River Shivnath joins Mahanadi at a little distance from Shivrinarayan, therefore sometimes the town is said to be situated at the confluence of these three rives, forming a triveni sangam.

Shivrinarayan town is part of Janjgir-Champa district of Chhattisgarh. District Gazetteer explains the origin of the name Shivrinarayan as a corrupted form of Sawar Narayan, named after an old Sawara who lived in a forest and worshiped Jagannatha. A local tradition1 associated the town as the birth-place of Shabari, a female mendicant mentioned Ramayana who offered fruits to Rama and Lakshmana. Ramayana of Valmiki (वाल्मीकि) mentions Rama’s meeting with Shabari however it is silent on her genealogy and origins. The epic tells that Sage Matanga (मतंग) at his death-bed told Shabari to stay at his ashram and wait for Rama (राम) and Lakshmana (लक्ष्मण) who will pay her a visit very soon. Rama & Lakshmana met Kabandh (कबंध) in the Dandaka forest and the latter told them to go to Pampa-Sarovar in the west direction where they would find Matanga-van, named after the hermitage of the Sage Matanga. Kabandh told them that all the sages have left the place but one Shabari is waiting for them. Rama and Lakshmana reached Pampa Sarovar and met Shabari. When she saw them, she fell prostrate and embraced their feet. She was very much overwhelmed, again and again bowed her head. She bathed their feet with water and provided them a high seat. Then she brought and offered various bulbs, roots and fruits which they partook again and again. Shabari requested Lord Rama that she wanted to leave her body and join the place where all other great sages have been residing. Lord Rama accepted her request and granted her desired place. Here ends the Ramayana episode of Shabari. A local tradition attributes that Shabari asked Rama to have her name getting prefixed with his name, Narayana, and thus the town was named likewise.

Mallick tells that Sabaras (or Shabaras, Savaras etc.) used to worship mother goddess as references of the same is found in many ancient texts. They were known to worship her with sacrificial rituals. She opines that during the Aryanization of the Chhattisgarh region, the Sabaras would have helped the invaders fighting by their side. They would have gained an important position in the new equation paving a way to assimilate their local gods with the Aryan pantheon. Thus, the goddess Shabari got associated with Vishnu, in his form as Rama. If we have to believe in this Aryanization theory, then this assimilation of local gods into Aryan pantheon should have happen in very ancient past, and the antiquity of Shivrinarayan would be hard to be placed in that remote past.  Sabaras were an ancient tribes mentioned in many ancient texts including Aitareya Brahmana, Mahabharata, Arthashashtra, Amarakosha, Kadambari, Skanda-purana, Markandeya-purana etc. The tribe also finds mentions in various foreign accounts such as Ptolemy and Megasthenes2. The Sabaras were said to be living near the Vindhya mountains. Russel3 mentions Savars as the primitive tribe numbering around 70,000 persons in the Central Provinces in 1911, and principally found in the Chhattisgarh districts and those of Saugor and Damoh. The eastern branch of the tribe belongs chiefly to the Uriya country. This eastern branch is the present Saoras of the Odisha. Local traditions assigns the origin of the tribe to Shabari.

Shivrinarayan also has a connection with Lord Jagannatha of Puri. Among the various theories behind the origin of the Jagannatha idols, one places Shivrinarayan as the original spot where the idols were in worship. On legends connecting Sabaras with Lord Jagannatha, Russel mentions few. One legend mentions that Sabaras were created for carrying stones for the construction of the great temple at Puri and for dragging the car of Jagannatha, which they still do at the present time. Yet another legend states, “They are descended from an old Bhil hermit called Sawar, who lived in Kharod, two miles from Seorinarayan. The god Jagannatha had at this time appeared in Seorinarayan and the old Sawar used to worship him. The kind of Orissa had built the great temple at Puri and wished to install Jagannath in it, and he found a Brahmin to fetch it from Seorinarayan, but nobody knew where it was except the old hermit, Sawar. The Brahmin besought in vain to be allowed to see the god and even went so far as to marry his daughter, and finally the old man consented to take him blindfolded to the place. Brahmin, however, tied some mustard seeds on a corner of his cloth and made a hole in it so that they dropped one by one on the way. After sometime they grew up and served to guide him to the spot. The Brahmin then went to the Seorinarayana alone and begged the god to go to Puri. Jagannatha consented and assuming the form of a log of wood, floated down the Mahanadi to Puri, where he was taken out and placed in the temple.”

General Epigraphs – These are the epigraphs which are not associated to a particular monument. 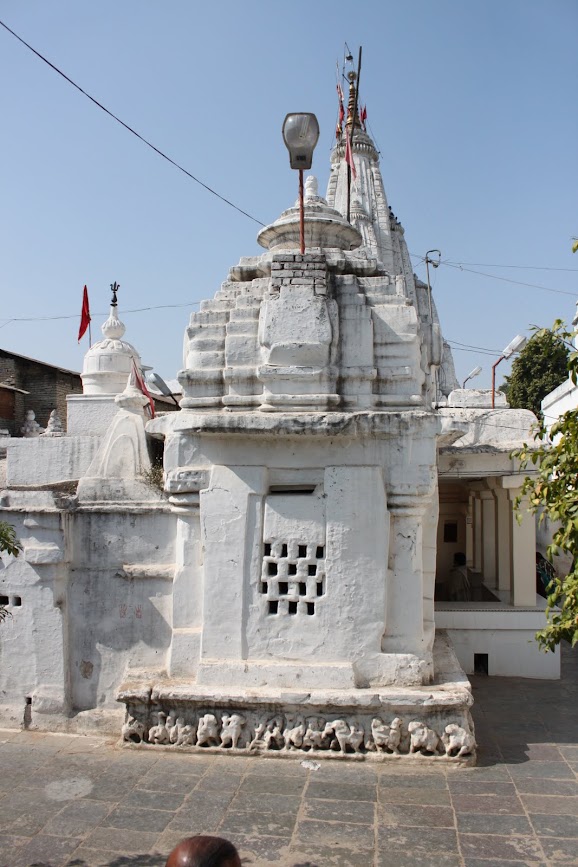 Nara-Narayana Temple (नर-नारायण मंदिर) –  This is the main temple complex of the town and as per a local tradition it was constructed by king Shabar. There are numerous temples, small and large, within the complex. The present structure is very modern and does not reflect any sign of antiquity from outside. However the sanctum and its doorway is of the original structure which may have been constructed during the Kalachuri period. There is an image of Lakshmi-Narayana riding over Garuda on left side when you enter into the temple. Ten incarnations of Vishnu are depicted on the top and bottom of the image. The statue needs proper cleaning as it is much worn out due to continuous usage of vermilion and other similar materials. 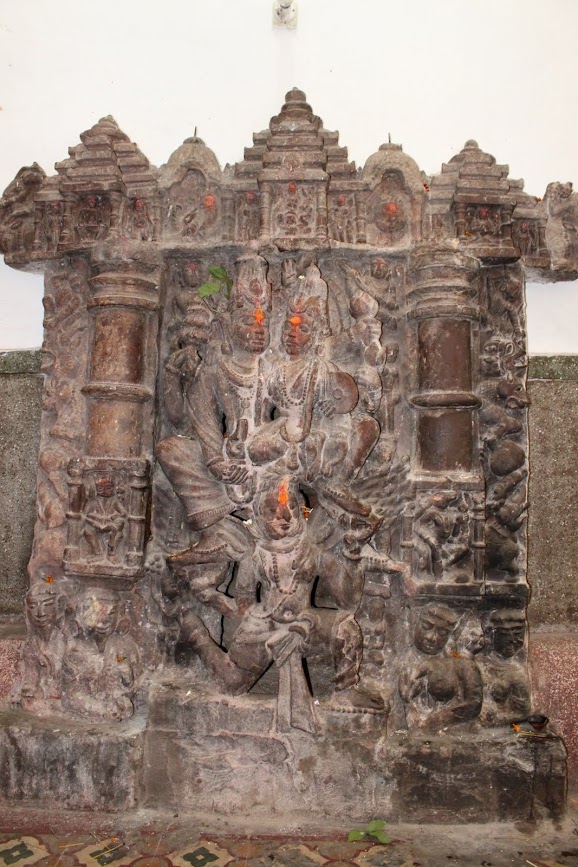 The sanctum doorway is very exquisitely carved. Shankha and Chakra ayudha-purushas (anthropomorphic forms of conch and discus attributes of Vishnu) are found on two lateral walls of the mandapa just before the sanctum. River goddesses, Ganga and Yamuna, have their regular bottom positions on the door jambs. They are accompanied with a pair of dvarpalas. The dvarpalas are shown with four hands carrying gada (clubs). Snakes and serpents are carved all around the jambs. Vishnu is present in the center of the door lintel, on lalat-bimba. Another image of Vishnu riding over Garuda is present above the previous lintel. 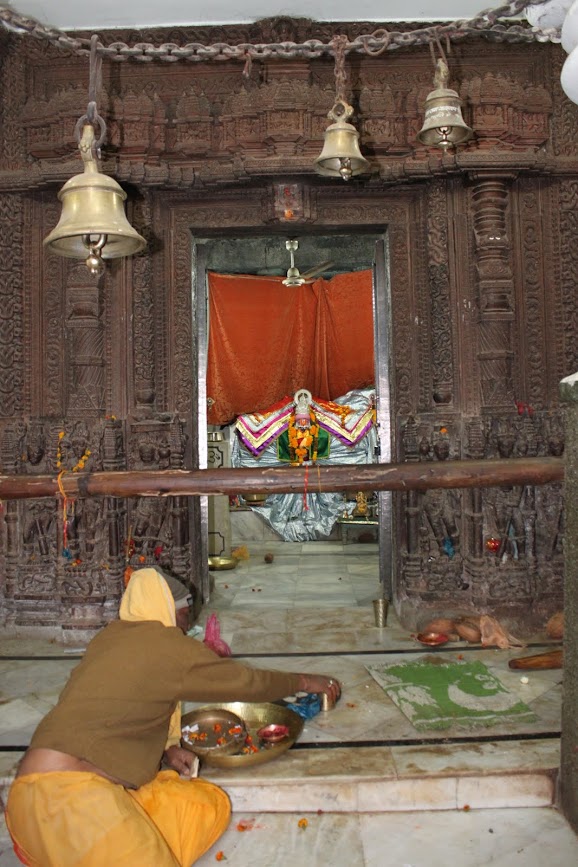 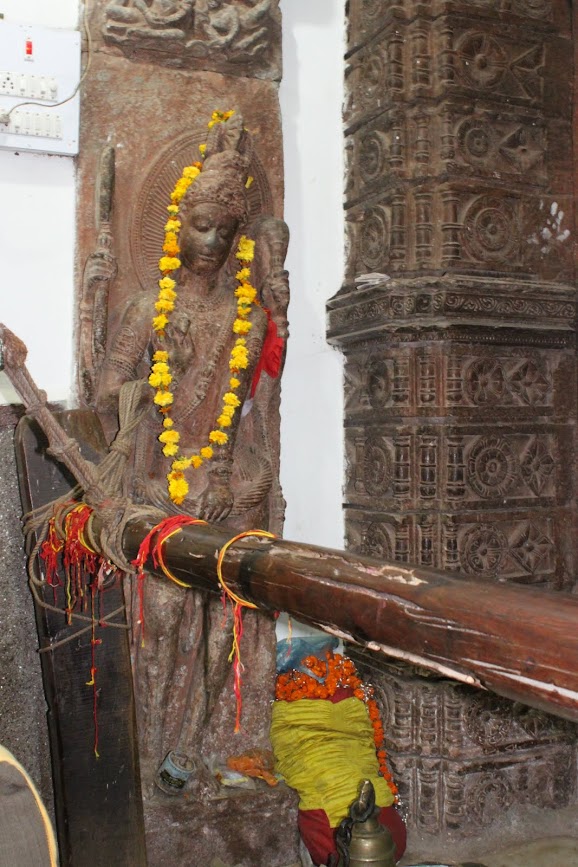 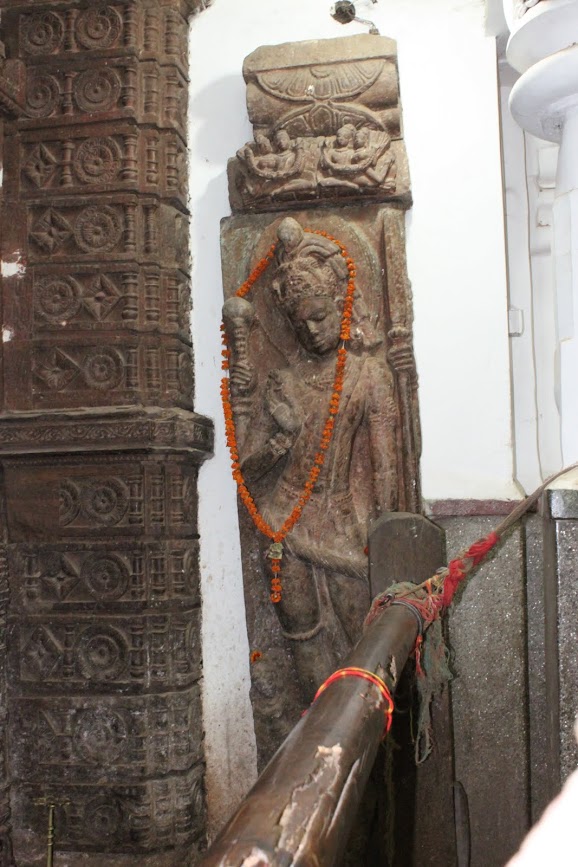 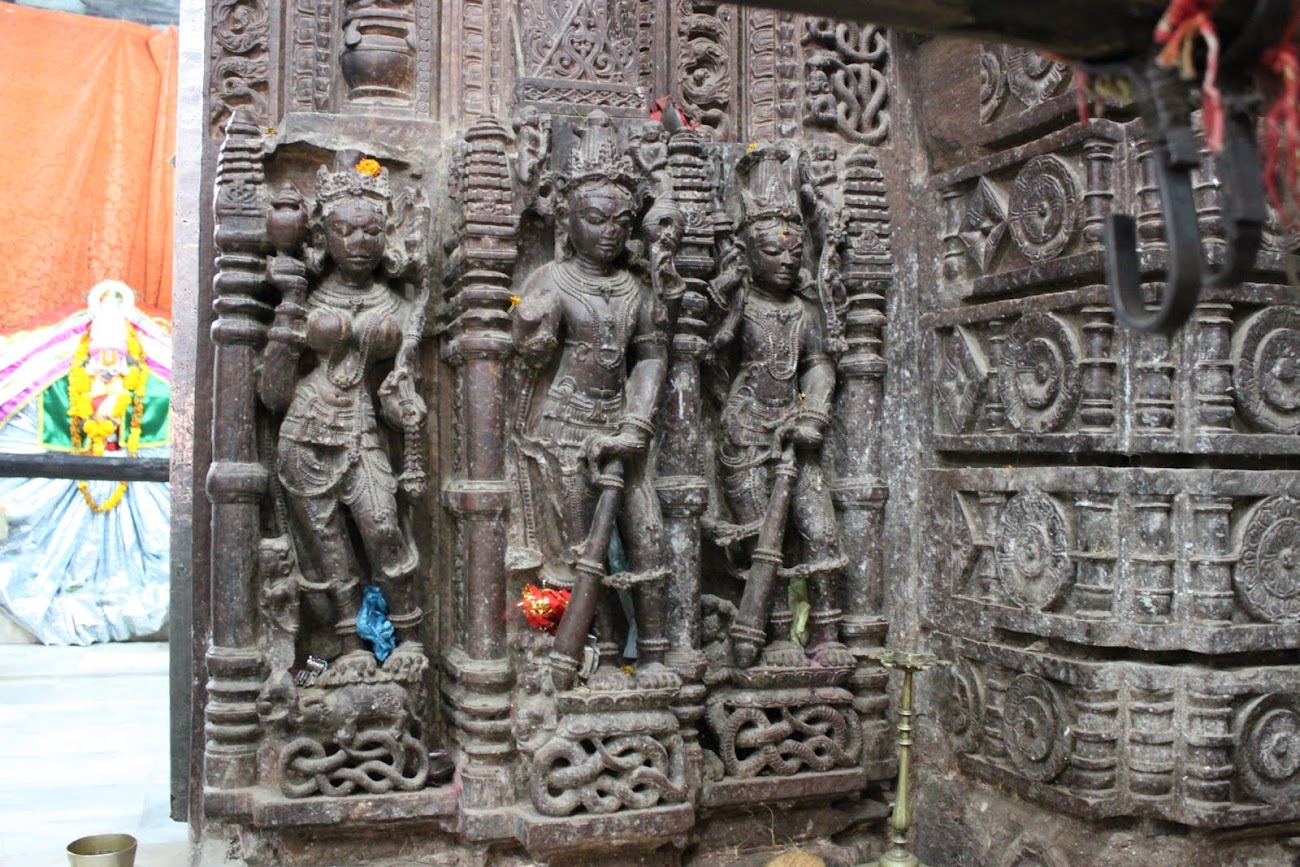 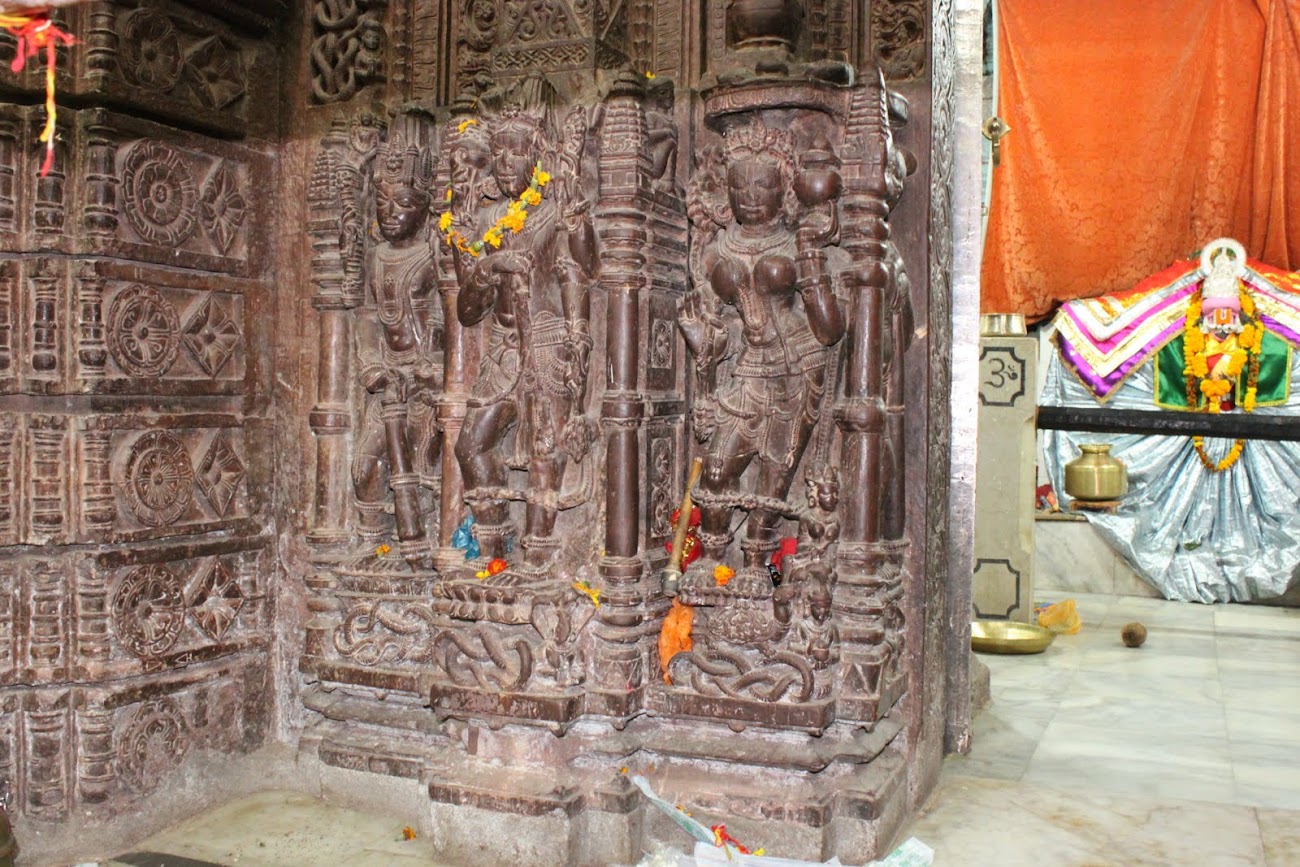 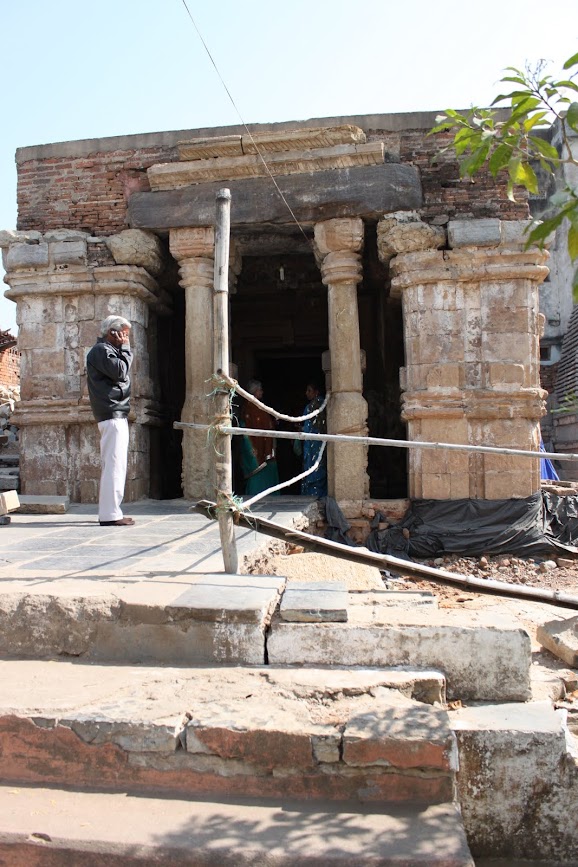 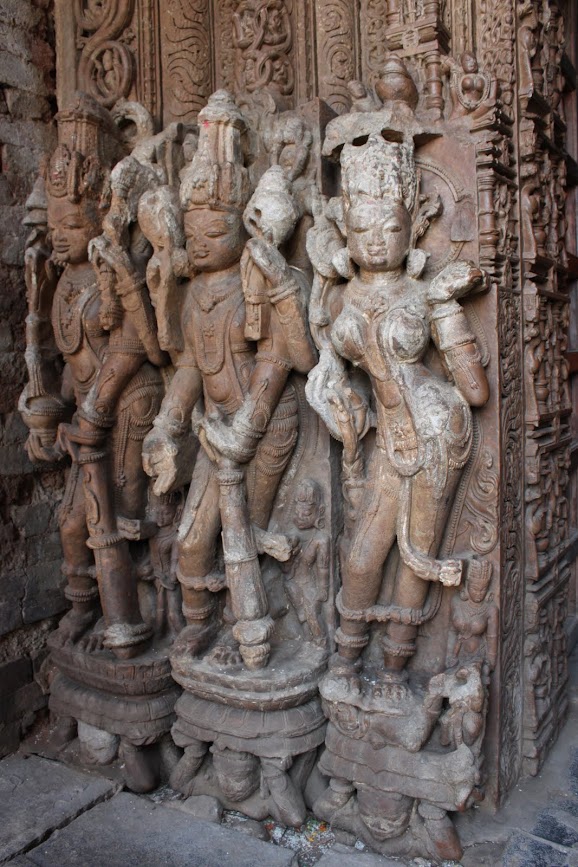 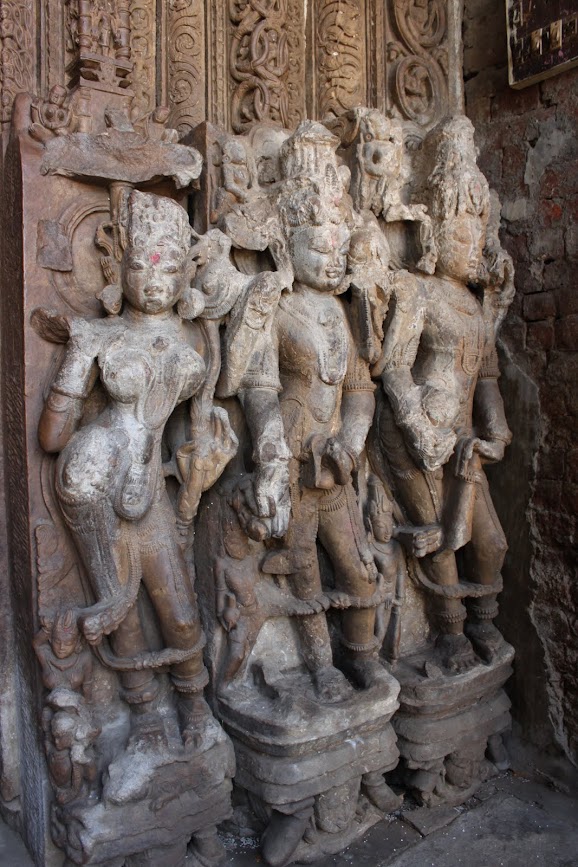 Keshava-Narayana Temple (केशव-नारायण मंदिर) – This temple is situated just opposite to Nara-Narayana temple. It is also referred as Shabari-Dai temple. The temple retains its original structure partially, its roof and mandapa has not survived, currently left with garbha-grha and antarala. Due to this it is referred as incomplete temple, originally designed to be finished within a night but the plan did not succeed and the sculptors left at the dawn. The temple is dedicated to Vishnu, evident with his presence over lalata-bimba. He is accompanied with Brahma and Shiva over the terminals, and the intervening space is occupied by nava-grhas. 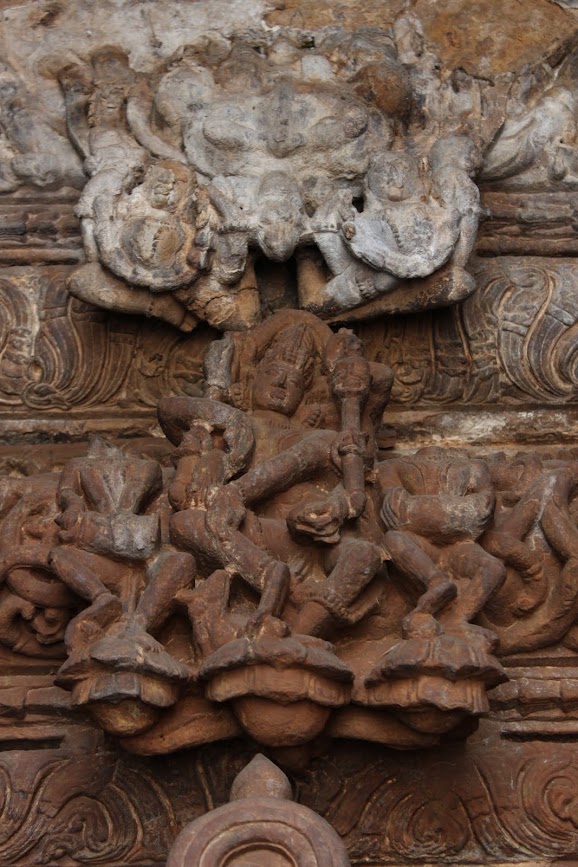 Above the lintel is present Nataraja. There are divergent views on the image on lalata-bimba. Some believe that it is an image of Vishwakarma4 while others take it as an image of Vishnu. The doorway is carved with four bands. A band, second from the inside, has niches housing different forms of Vishnu. Ganga and Yamuna are present on the door jambs at the bottom. They are accompanied with dvarpalas, two on either side. Side face of the door jamb is also carved, however its finished only on the left side, the right side is left incomplete, in fact they did not start any carving on that face except for the rough sketch of the design. 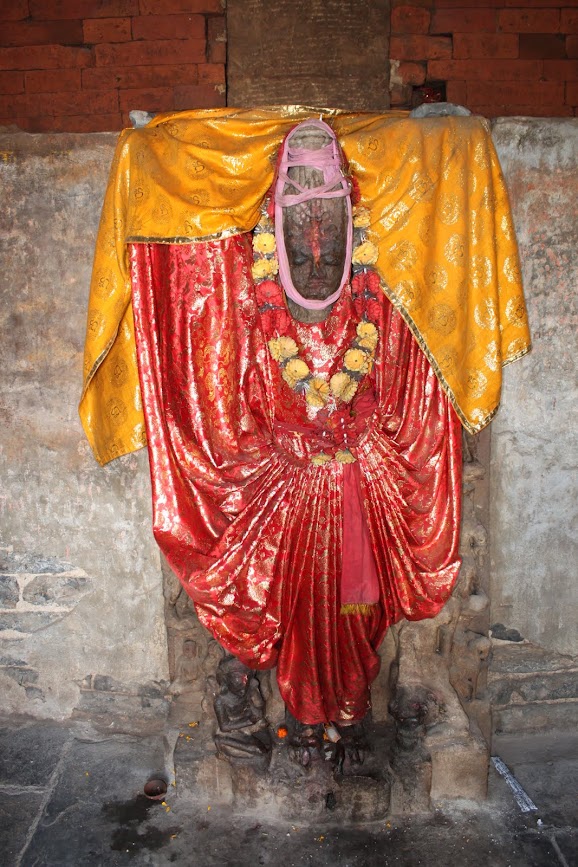 There is an image of Vishnu known as Kesava-Narayana inside the sanctum. He is shown with four hands, only one arm survived in which he is holding a chakra (discus). Ten incarnations of Vishnu are depicted around this central image. A small image, placed near his right foot is referred as Shabari. However, it is an image of a male who is shown holding his two hands in anjali-mudra. It may be of a donor, or a devotee.

Chandrachudha Temple (चन्द्रचूढ़ मंदिर) – This is the only Shiva temple at Sheorinarayan and it is located near Nara-Narayana temple. This is probably the oldest temple at the site as evident from an inscription found in this temple. However the temple is renovated to a great extent hiding all its antiquity.