Janjgir is the district headquarter of Janjgir-Champa district of Chhattisgarh. The town had been referred as Jehangir in the Indian Atlas Sheet1. J D Beglar visited the town in 1873-74 and described its antiquities. It is believed that Janjgir is the town of Jajallapura founded by the Kalchuri king Jajalladeva I (1090-1120 CE) as recorded in his Ratanpur inscription.  The town has two old temples, both contemporary and assignable to the Kalachuri period of Jajalladeva I. 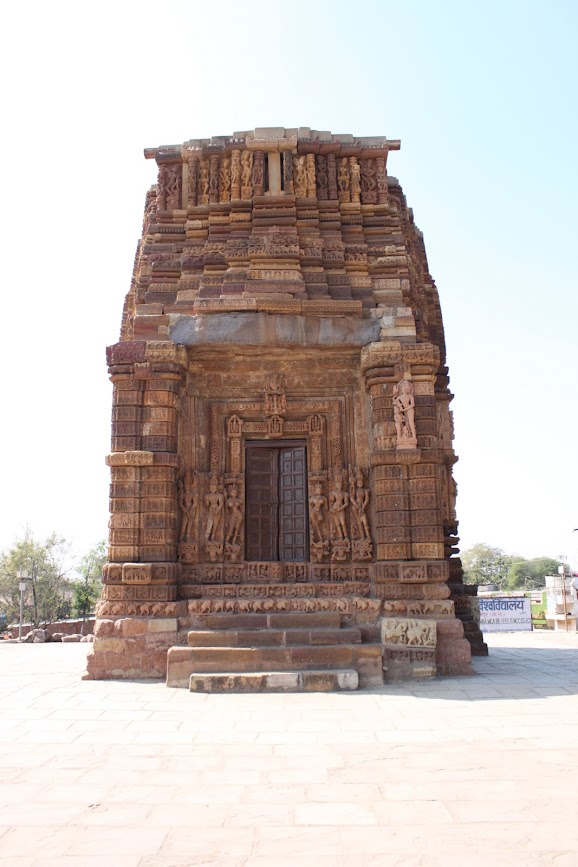 Vishnu Temple – This profusely carved temple is constructed over a high raised platform. This east facing temple is dedicated to Vishnu. This temple is never constructed fully as its shikhara was left unfinished. Beglar mentioned a legend stating that the temple here and at Sheorinarayan were begun simultaneously, and were rivals for the favor of the deity, each being pushed on with the utmost vigor towards completion, as the god, it was declared, would take his residence in the one first finished; the Seorinarayan temple won the race, Narayana took up his abode there, and this temple was abandoned and left in unfinished state. Another local tradition states that one fine day Vishvakarma, the celestial architect, started the construction at dusk to be finished by the dawn. However, as he was unable to finish the temple, he left it an unfinished state.

Many small miniature panels are embedded into the platform walls. It appears that these panels were adorned the mandapa of the nearby Shiva temple. When the mandapa of that temple collapsed, these panels were embedded into the platform of the current temple during repairs and renovations. Scenes of Ramayana and Krishna-life are the common theme of these panels. J D Beglar mentioned thse panels while describing the mandapa of the Shiva temple. Among these panels are found Rama shooting arrow through seven trees to display his strength to Sugreeva; Rama and Lakshmana chasing golden deer; Rama killing the deer with his arrow; monkeys carrying stones to build a bridge; Rama worshiping Shiva-lingam at Rameshvaram etc. Secular scenes like musician and dancers are also found. 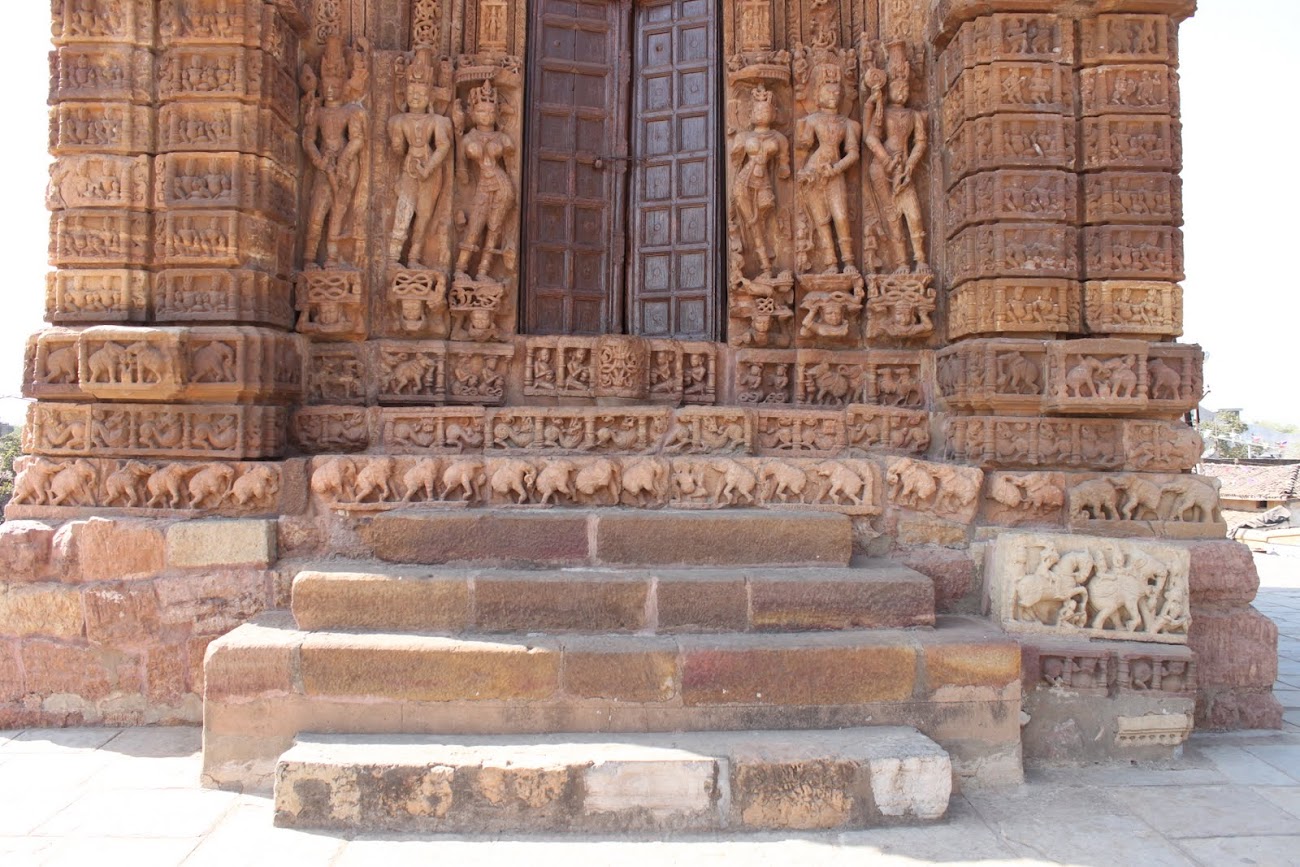 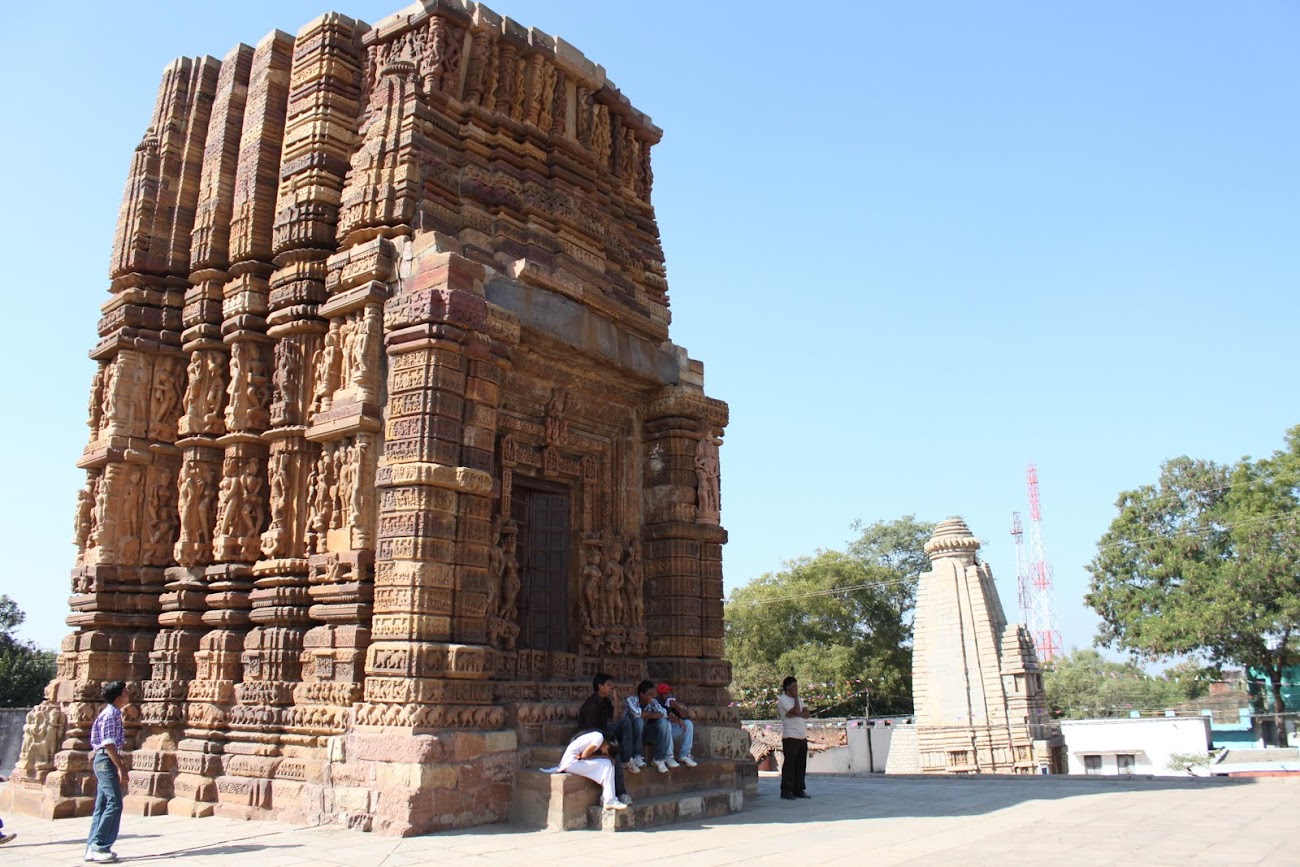 The temple faces east and stands in the middle of the large platform. As there is much space left in front of the temple, there might have been an idea to build a mandapa in front however, it was never realized. The temple consists of a garbha-grha and antarala. Its bada is constructed in sapta-ratha plan and is composed of pabhaga, jangha and baranda. Pabhaga is made of six mouldings, uppermost three are carved with various animals; frieze of elephants, frieze of vyalas or mythical animals and frieze of different animals at the top. A niche is provided on the bhadra of pabhaga portion. The jangha is divided into two storeys, separated by a single moulding and a chhadya. Baranda is made of five mouldings. 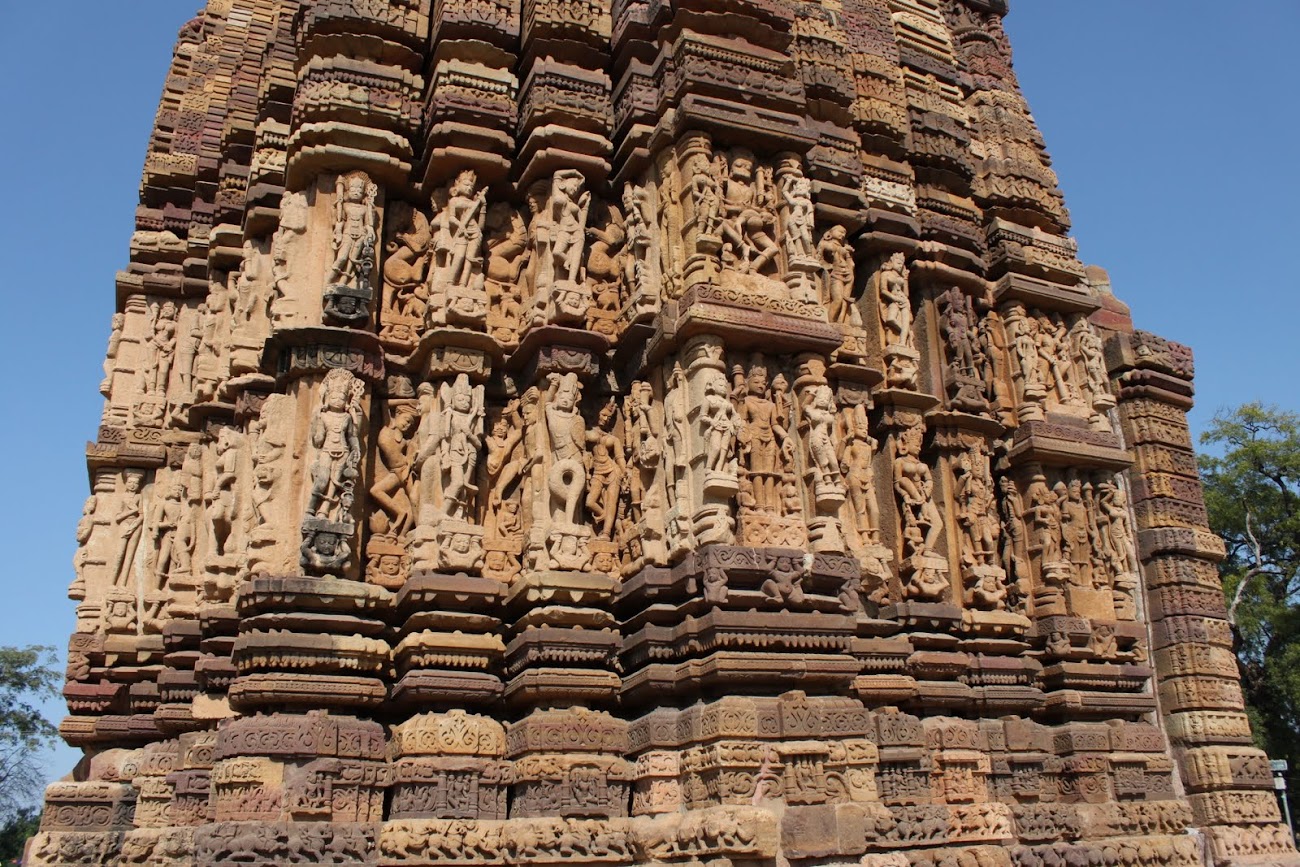 Niches are provided on all the projections and all are profusely carved on all the faces. Niches on bhadra have Vishnu and Narasimha in the south; Vishnu and Surya in the west and Brahma and Vishnu in the north. Niches on karna have dikpalas. Rest of the niches in the upper storey has apsaras and damsels in different postures. Niches on the lower storey have various deities, including different avataras of Vishnu. All these niches are supported on bhara-vahaka. The recess space is filled up with vyalas on the upper storey and asetics in the lower storey. Niches on antarala space has Varaha and Vishnu in the south and two images of Vishnu in the north. 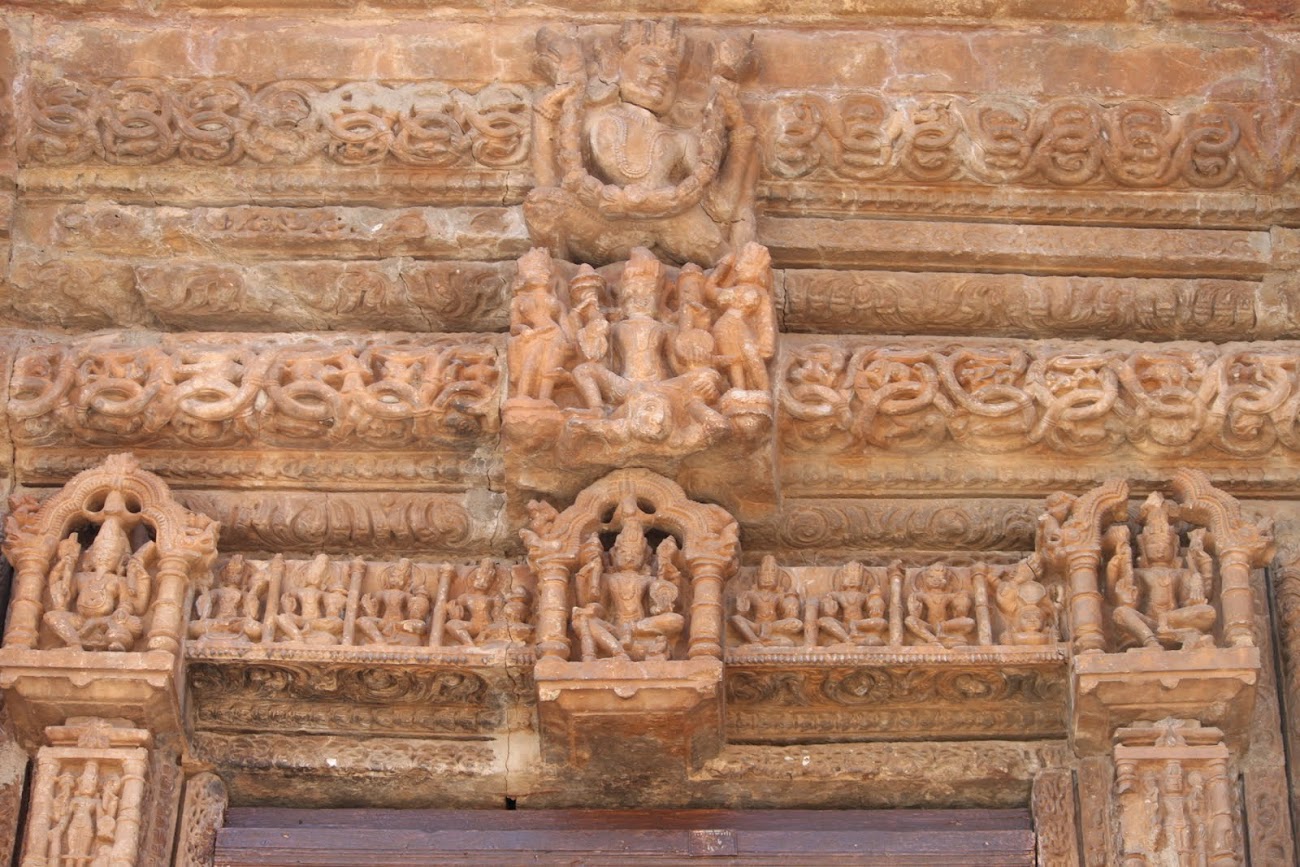 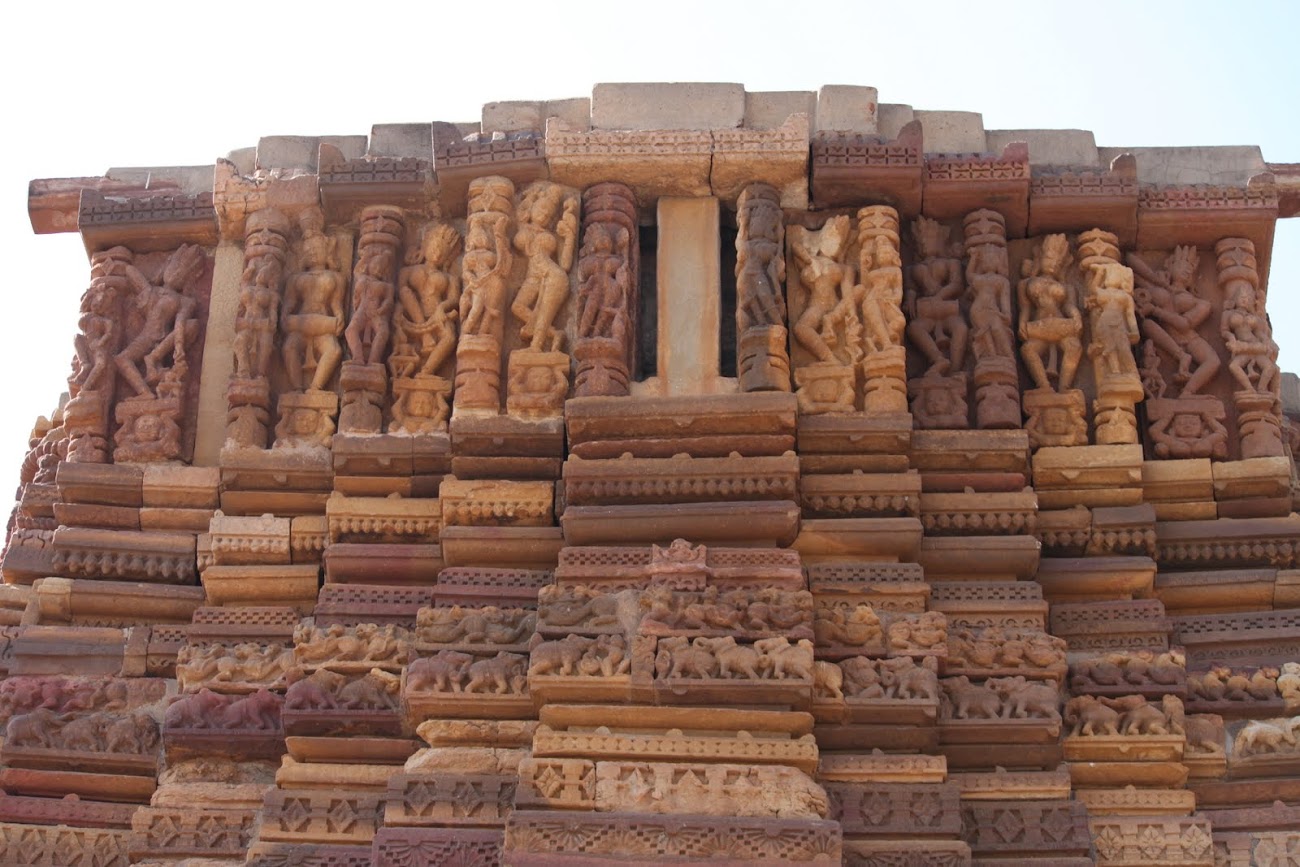 The antarala doorway is exquisitely carved. Three large images are present on the door-jambs. These include the river goddesses, Ganga and Yamuna, accompanied with dvarpalas. Vishnu is present on the lalata-bimba, with Brahma and Shiva present in its terminals. The intervening space is filled with depiction of nava-grhas. An image of Vishnu riding over Garuda is present over the architrave above the lintel. 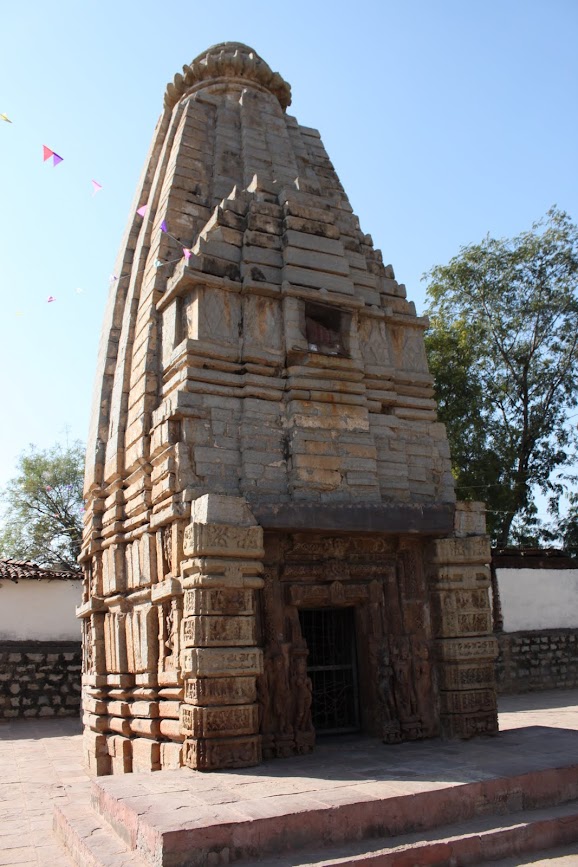 Shiva Temple – This small Shiva temple is located near to the above Vishnu temple, opposite side of the road. Originally, the temple consisted of a garbha-grha, antarala and a mandapa as seen in the photos taken by Beglar in 1873. However, at present it is standing without its mandapa. The structure was much decayed and it did not survived the toll of time as, probably, the big Pipal tree grown near the mandapa damaged the structure beyond repairs. Beglar incorrectly thought it to be a Vishnu temple. It is a Shiva temple evident from an image of Shiva on the lalata-bimba of garbha-grha entrance. Shiva is accompanied with Brahma and Vishnu present on lintel terminals. The intervening space is occupied by nava-grhas (nine planets). Shiva as Nataraja is put on the middle of architrave above the lintel. Life-size statues of the river goddesses are present over the door jambs, along with similar size dvarapala images. 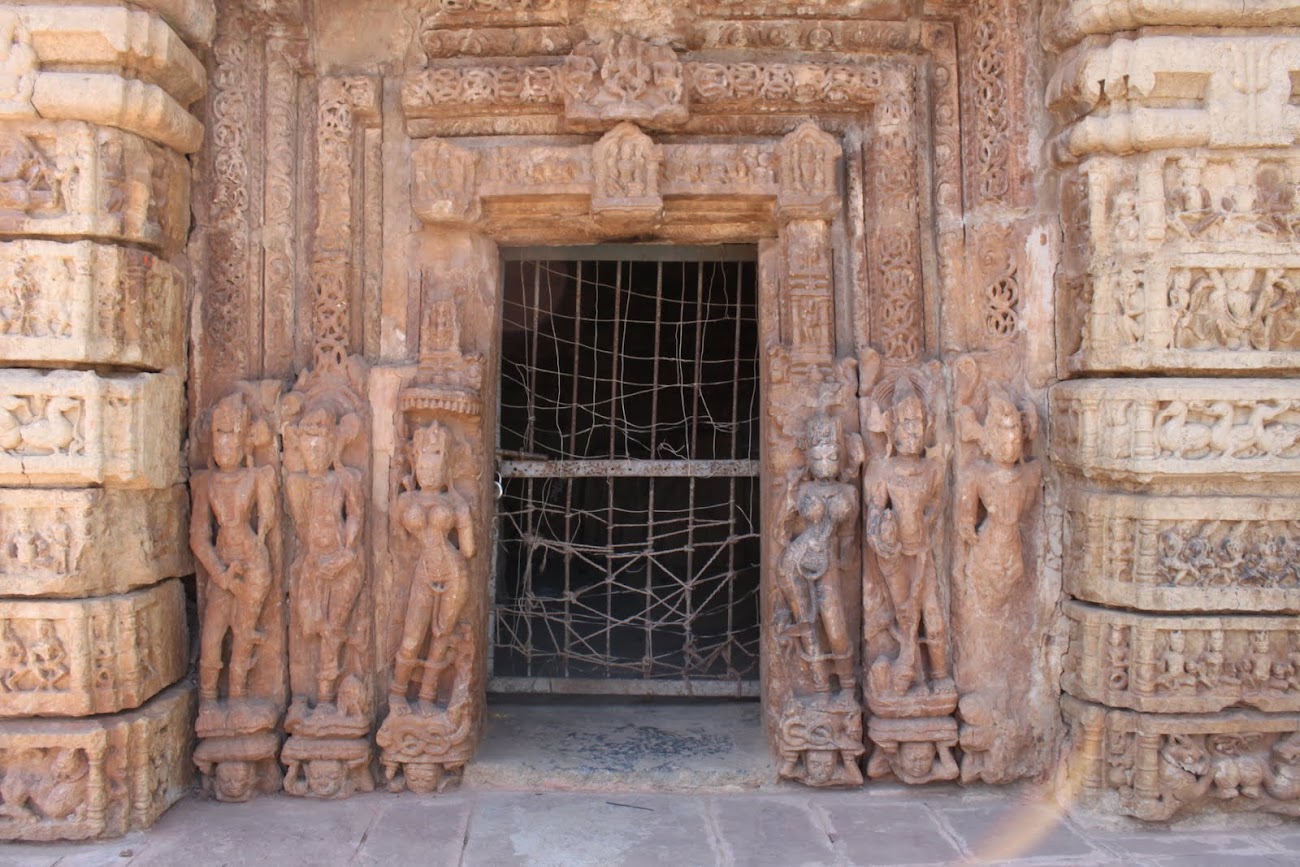 The exterior of the temple is very simple except the images in niches over bhadra. Bada is constructed in pancha-ratha pattern. Jangha is divided into two storeys. Niches are only provided on bhadra. In these niches, Brahma and Shiva as Nataraja in the south and Surya and Harihara in the west and Chamunda and Veenadhara-Veerabhadra in the north. Niches over the antarala in the south have Ganhesha and Kartikeya. Arrangement of parshva-devatas over the bhadra niches is peculiar and different from the regular arrangement seen on Shaiva temples.