Melacheri is a small village in Viluppuram district of Tamilnadu. It is situated not very far from Gingee city, famous for its fort. The earliest modern reference of the town is found the South Arcot district gazetteer of 19061. It mentions that it a fortified town known as “old Gingee” in its bygone days. The temple of Maddilesvara was mentioned with its rock-cut linga. Earlier, it was the chief village of a jaghir known as Gingee or Melacheri jaghir. It was said to be granted by the Delhi Emperor to a Rajput, Sivanath Singh. It consisted to seven taluks. However, after the fall of the Delhi Empire in the hands of the Nawabs of Arcot, this jagir was slowly reduced to mere 11 villages, granted for life to Tejonath Singh. The descendents of the family still live in the village in very dilapidated conditions.

The temple was included in the Pallava antiquities compiled by Dubreuil2. He got curious after reading in the gazetteer about the rock-cut linga. During his visit, he discovered the inscription written in the Pallava Grantha script. He provides a translation of the same taking assistance from S Krishnaswami Aiyangar of University of Madras. He concludes that the temple belongs to the middle of seventh century CE and may be credited either to the Pallava king Narasimhavarman I (630-668 CE) or to Parameswaravarman I (670-695 CE) explaining that Chandraditya mentioned in the inscription appears to be a name of either of these kings. A H Longhurst3 also includes this temple in his list of Pallava temples of early period. He mentions that Chandraditya is evidently a name of a Pallava king however whose we cannot say with certainty. A better description and interpretation was made available K R Srinivasan4 in his compendium on the Pallava cave temples. 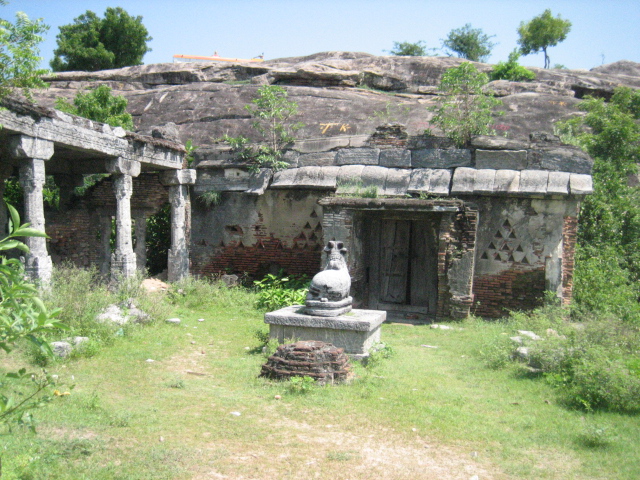 Sikhari-Pallaveshvaram Temple – This rock-cut temple faces west and is excavated on a granite boulder facing a pond. The plan has a mukha-mandapa followed by a cell in the rear wall. The front portion of the temple is hidden behind a structural mandapa of a later period. The mukha-mandapa is supported on two pillars and two pilasters. All are tetragonal throughout. Above these is supported a corbel carved with angular-profile. The cell in the rear has a rock-cut linga, a very unique feature of the rock-cut shrines assigable to the Pallava period. It is probably the only shrine where the linga is carved out from the original rock. A large lotus medallion is carved over the ceiling of this cell. 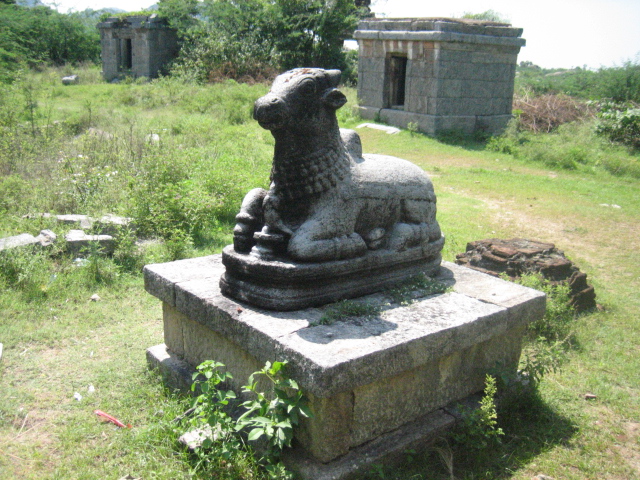 Locally this temple is known as Maddileshvara temple. There is a modern Murugan temple on the top of a nearby hill.  There are few modern shrines built opposite to this cave temple. A Nandi is placed now facing opposite to the cave temple as well. The temple is only open for few hours and on certain days, therefore getting a look of inside is little difficult in case you are not on the spot at the right time.

Even though we have a foundation inscription, there is no clarity on the founder of the temple. A king named Chandraditya is said to have excavated this temple, naming it Sikhari-Pallaveshvara, suggesting that either the king was a Pallava or one of their subordinate. The name Chandraditya is unknown in the list of the Pallava kings. K R Srinivasan5 writes, “..though this temple is aberrant and has nothing characteristically Pallava in it and was not excavated by a Pallava king, it has to be considered here, only because of its location among other Pallava cave-temples in the Pallava country.”

Venkatasubba Ayyar6, the first editor of the inscription, mentions that as this title (Chandraditya) does not occur in the numerous known birudas of the various Pallava kings, Chandraditya might be a Pallava prince about whom we know nothing. Venkata Rama Ayyar7 is of opinion that Chandraditya of Melacheri cannot be any other than a Pallava knowing that Melacheri was part of the Pallava territory from the time of Mahendravarman I (600-630 CE). He asserts that on paleographic grounds the inscription belongs to the period of the Pallava king Narasimhavarman I (630-668 CE) at the latest. Also, Simhapura was named evidently after Narasimha. He concludes that Chandraditya, the supreme ruler, could have been no other than Narasimhavarman I, the proud conqueror of Vatapi (Badami), the Chalukyan capital. K R Srinivasan also of opinion that this temple was probably excavated during the reign of the Pallava king Narasimhavarman I.

When we compare this temple with other cave-temples credited to Mahendravarman with affirmation, we find a good number of differences. Pillars of this cave-temple are plain throughout, in contrast to the pillars with cubical base and top and intervening octagonal section found in all the Mahendra cave-temples. Cave temples at Kuranganilmuttam and No 4 of Mamandur also have plain pillars however we do not have Pallava inscriptions in these temples, therefore these are considered Pallava creations only because these are located within the Pallava territory.

The corbel here at Melacheri is of angular profile in contrast to the curved profile corbel found always in other Mahendra temples. Angular profile corbels are also used at Singavaram, however there we do not have any Pallava inscription. Assignment of Singavaram cave-temple to the Pallavas is only on the basis to its location within the Pallava territory. Linga cut from the mother rock is only found at-Melacheri, a unique feature within the Pallava territory as no other Pallava cave-temple, Mahendra as or later period.

As this cave temples shows many deviations from the characteristic Pallava styles, it is very probable that it was executed by the Pallava subordinates with the architects who brought in regional flavors into its execution. If accepted, then king Chandraditya may be a regional vassal under the Pallavas.

As I do not have any pictures from inside the cave temple, I am attaching a video providing a glimpse of the insides of the temple.