Introduction – Gyaraspur is a small town of great historical importance, medieval period, in Madhya Pradesh. This comes under Vidisha district and is 35 km away from Vidisha. The name is derived from a fair which is held at the eleventh month of the Hindu calendar, gyaras means joy at the eleventh. Gyaraspur is famous for a shalabhanjika, kept now at Gujari Mahal Museum Gwalior, statue which is considered as a matchless oriental beauty by many historians and experts. She is also called as Indian Venus or Gyaraspur Lady.

Monuments – There are many monuments of importance belonging to 9th-10th century. This is a small town and all the monuments can be visited walking around. 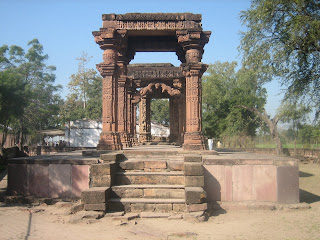 1. Athakhamba (9th century) – Situated very near to the local bus stand, this shrine has only eight pillars left surviving. An inscription dated 982 AD, helps to put this temple to 9th century AD. The temple was constructed on a raised platform, facing east. This can be reached with a flight of steps on eastern side. The structure of the temple suggests that it had a mukh-mandapa, antarala and garbha-griha. The pillars of the temple are extremely well carved with pot-creeper motifs. These are carved with stepped-octagonal-facets. These have an intermediate capital having lion-like faces at the corners. Above this capital is a round honey-comb style pillar segment which support another capital to support the beams. 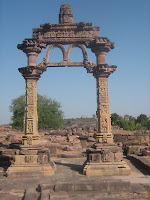 2. Hindola Torana (10th century) – On the way to Mala Devi temple, this complex is on the left side. This is called Hindola Torana as it looks like a platform for a swing, however it was not intended for that purpose. It seems to be a gate entrance to a temple, where Chaukhamba would have been the mandapa of that temple. Dashavataras (ten incarnations) of Vishnu are carved on the door jambs of this torana. 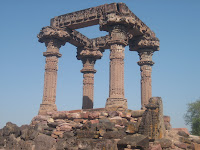 3. Chaukhamba (10th century) – This monument, the four pillars, are within the Hindola Torana complex. This seems to be the mandapa of the temple, which entrance gate would have been Hindola Torana. 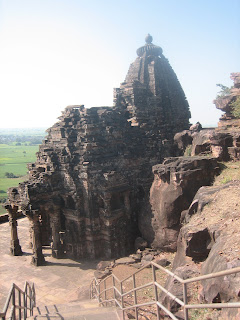 4. Mala Devi Temple (9th century) – This temple is located on a hill, 1.6 km from the bus stand. This Pratihara period temple is constructed on the eastern slope of the hill. This is partly rock-cut and partly structural. Ornamented with Jaina Yaksha, Yakshini and Jina Tirthankar images, the sanctum door jambs have Ganga, Yamuna and other Hindu deities. Inside the sanctum are placed four Jina Tirthankar images, seated on padmasana. There is a sikhara above the sanctum, where Vaishnavi, seated on Garuda, is placed. 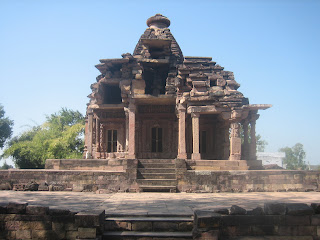 5. Bajra Matha (10th century) – Located near the bus stand, this is an example of a triple shrine temple. In the 10th century development, this temple’s gate, doors and back parts are engraved with Shiva, Vishnu and Brahma. Later on this temple was transformed as Jain temple in which Tirthankar statues are established. Narasimha, Varaha, Vishnu, Shiva, Tripurantaka are shown in the various niches on the external walls. 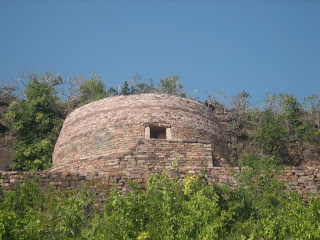 6. Dhaikinath Stupa (6th-7th century) – This about 1.3 km from the bus stand. The Hemispherical dome (10.05 m) of the stupa resting on a circular berm (height 2.74 m and diameter 18.4 m) is incompletely preserved. Small platform like structures project from the berm in each cardinal direction. Pieced of plain railing are found scattered at the site which also shows an image of Buddha seated in Bhumisparsha-mudra.

Food and Accommodation – This is a small town with not proper lodging facilities. You will find small eateries where you can get limited Indian food. Better option would be to stay at Sanchi, Vidisha or Bhopal and visit Gyaraspur for a day.

How to Reach – Gyaraspur is about 35 km from Vidisha. Regular buses ply from Vidisha to here. Nearest railways station is Vidisha and nearest airport is at Bhopal.