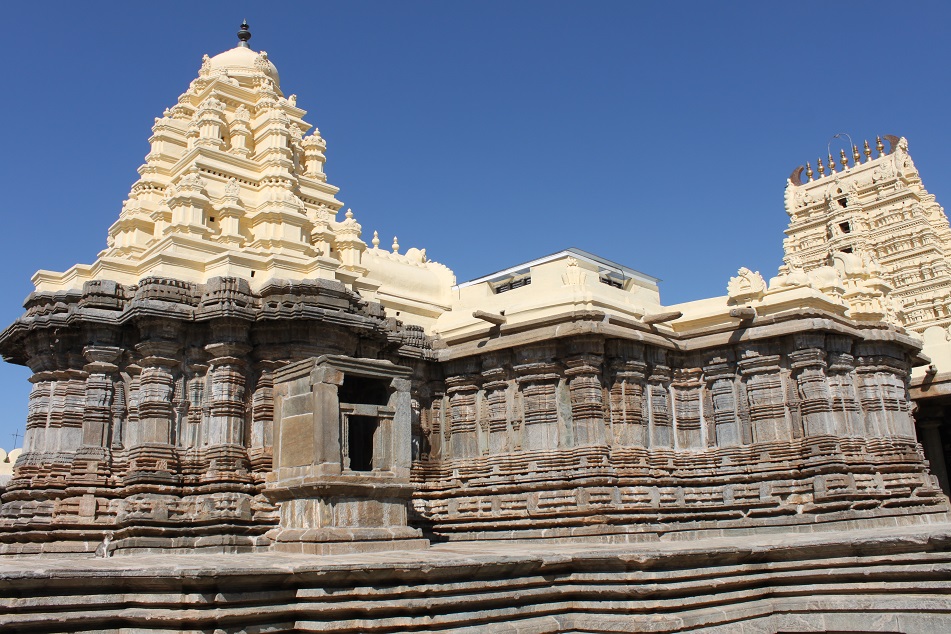 Introduction – Nagamangala is situated in Mandya district of Karnataka. Its earlier name was Phani-pura (city of snakes) which later got changed to Nagamangala, blessed with serpents1. However, in the inscriptions, the place is referred as Vira-Ballala-chaturvedi-bhattaratnakara, the name adopted over a Hoysala ruler, Vira Ballala. It is an important town of the district, from industrial as well as religious perspective. Rice2 mentions that it was a principal sheep breeding taluk of the district and also famous for its brass objects. These brass objects are mainly made by the Jain community at Bellur.

Buchanan mentions a legend about the foundation of the town. It goes that the town and its buildings were erected by one prince named Jagadeva Raya, belonging to the family of the Mysore rulers, and lived about 600 years ago. However, this tradition contradicts the epigraphical evidences as the earliest epigraph, found here, refers to the Ganga king Marasimha II, who ruled between 963-975 CE.

The town would have been included in the Western Chalukya dominion and later coming under the Hoysalas and subsequently to the Vijayanagara empire. The town would have played an important role during the Hoysala rule, as the chief queen of Vishnuvardhana, Bammaladevi, renovated, repaired and bestowed grants to the Sankara-Narayana temple at the town.

Rice writes, that its inner fort was erected in 1270 by Chaimi Danayak, the outer fort by Jagat Deva in 1578. It was acquired by Chama Raja Wodeyar of Mysore in 1630. The town was reduced to ruins in 1792 by Maratha army under Parasu Ram Bhao and 150000 palm trees were destroyed.

During the Maratha-British wars, the town played an important part, partly due to its location being situated on the route to Srirangapatnam. Nagamangala suffered severely due to these wars. Buchanan writes, ‘Before the invasion of Parashuram Bhow, it (Nagamangala) has 1500 houses. Now there are about 200 houses scattered around in ruins. At the same time the Marathas destroyed about 150,000 palm trees. It has three fine reservoirs, however for the last four years so little rain has fallen, that the water levels are very much down affecting the rice cultivation.’

Continuing on the destruction during the wars, Rice3 writes, ‘On the approach of the British army, the Sultan laid waste the whole country between this (Nagamangala) and the capital, and forced the inhabitants to retire to hills. A large proportion perished of hunger and of the disease following too scanty a diet, and in the whole Nagamangala country one-half of the inhabitants are now wanting, although they have had eight years to recover. This is the calculation of the officers of Government. To judge from the desolation that I see around me, I should conclude the loss to be greater.’

Monuments: There are three temples of interest in this town.

The cell of the main temple is stellar in plan, however with flattened on its west, south and north sides. Adam Hardy4 assigns the temple to the Bhumija variety of Nagara style.

The temple is enclosed within a prakara wall, with an gopuram entrance on the east. This gopuram with is prakara enclosure has been added during the Vijayanagara period. The gopuram tower rises to six stories and topped with a sala (oblong) structure. There are many shrines attached to the inner side of the prakara wall.

The navaranga of the temple is square from outside, however oblong inside, divided into twelve ankanas (segments). It is entered through a large door, guarded by dvarpalas of Hoysala period. The navaranga is extended on its south and north, where a cell is provided to accommodate two shrines.

The cell (garbhagriha) on the south has a doorway with a lintel depicting a row of nine shikharas. Inside the cell is an image of Venugopala and his consort. The image appears to be of Vijayanagara craftsmanship5. The cell on the north has an image of Lakshmi-Narasimha, belonging to the same period as that of the former image.

From the navaranga is connected a sukanasi, the door of which is guarded by two Vijayanagara period dvarpalas. The main cell inside is a square room and has an image of Keshava, popularly known as Saumyakeshava because of its benign appearance. Keshava is accompanied with his two consorts and a prabhavali behind him displays ten incarnations of Vishnu. The image is of Hoysala workmanship.

A Garuda pillar is setup opposite to the entrance of mukha-mandapa. As per local accounts, this pillar was setup by the Jagadevaraya, a Vijayanagara officer. This tall granite pillar has a square base topped with a tapering octagonal shaft. On the sides of the square base are depicted, Garuda on west, Hanuman on north, Tripundara on east and a lion on south.

Narasimha Temple – It is situated at little distance in the west from Saumyakeshava temple. As per the local tradition, this temple is said to be earlier than the Saumyakeshava temple, which may not be true. The temple appears to be of late Hoysala origin and does not display great craftsmanship. The temple is consisted of a garbhagriha, antarala (vestibule), navaranga, maha-mandapa and mukha-mandapa. The garbhagriha has a pradakshina-patha, thus putting the temple under santhara category.

An image of Yoga-Narasimha is placed inside the garbhagriha. The image is devoid of any ornamentation and gives a very plain appearance. An image of Vishvaksena is placed in the navaranga. There is also an image of naga in navaranga, and in front of that is am opening in the floor, said to be a hole of an ancient naga.

Bhuvaneshvara Temple –  This is the Shiva temple situated at the north-east of the Saumya-keshava temple. This temple would have been constructed before the time of Hoysala Vishnuvardhana as an inscription mentions that his queen renovated this temple.