Pali is the tehsil headquarter in Korba district of Chhattisgarh, it is situated around 50 km from Bilaspur on NH-130. In its golden days, Pali would have been an important place  as it has been mentioned in the Kalachuri inscriptions as a prized conquered territory. Bilhari Inscription1 mentions Mugdhatunga wrestled Pali from the lord of Kosala. Benares plates of Karna2 attributes this feat to Prasiddhadhvala. Prasiddhadhvala and Mugdhatunga were titles of the Kalachuri king Shankargana II (890-910 CE), son of Kokalla I (850-890 CE). The lord of Kosala, mentioned in these epigraphs, would have been the Bana king Vikramaditya I Jayameru, son of Malladeva, who also caused a Shiva temple to be constructed at Pali. Benares plates of Karna mentions Prasiddhadhavala conquered Pali thinking in his family there would be born men precious on account of their greatness in this world. This suggests that he put Pali as a vice-royalty under one of his brother.

V V Mirashi3 opines that the Banas would have wrestled Pali from the Somavamshis. Banas were traditionally associated with the Pallavas. Their northern adventure would have happened during the northern campaign of the Pallava king Nandivarman II Pallavamalla (731-795 CE). The Banas might have pursued further in the north to establish their rule around Bilaspur, and Pali as their capital. The Bana adventure was very short-lived as soon they were overthrown by the rising Kalachuri power.

Mahadeva Temple – This east facing temple is constructed over a 3 feet high platform. It is situated next to a water-tank, on periphery of which many temples were once adorned4. The temple has a garbha-grha, antarala and an octagonal mandapa (hall). The mandapa has not survived fully and it has been renovated many times. Its octagonal shape is achieved by cutting off the corners of a square. This is probably the only temple in Chhattisgarh with an octagonal mandapa suggesting its experimental nature. 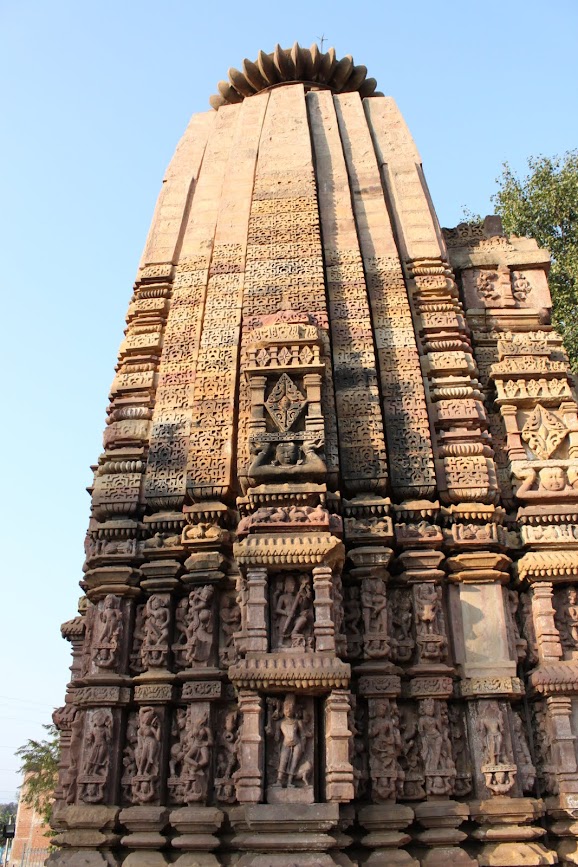 Deul is composed of vedi-bandha, jangha and baranda. It is sapta-ratha in plan. Vedi-bandha has five mouldings. Jangha is divided into two storeys, separated by a bandhana of a single moulding. Niches are provided on all the offsets, one niche in each storey. Niches on bhadra have Kartikeya and Shiva-Andhakantaka in the south, Surya and Nataraja in the west and Chamunda and Nataraja in the north. Niches on other rathas are supported over bhara-vahakas. Lower niches on karna ratha have dikpalas. Niches on prati-karna and parti-ratha have dancers and damsels. Recess area is filled with amorous couples in the upper storey and hybrid vyala-like animals in the lower storey. The couples are shown in various explicit poses, big and prominent, Niches on antarala walls have Durga in the south and Saraswati and Harihara in the north.

Shikhara of the temple has survived partially, the present structure is its restored version. In the picture taken by J D Beglar in 1873, only five bhumis of the shikhara were evident, the external decoration of the part above till amalaka was all missing. It appears that the temple would have at least 9 or 10 bhumis in its original form. Sapta-ratha plan of the below bada continues over the shikhara. Shikhara is decorated with geometric designs, floral motifs however it is bereft of divine images usually put on bhadra. On its bhadra is provided a niche supported on a bhara-vahaka. Inside the niche is a large diamond shape design. Baranda moulding has a frieze of sporting geese. 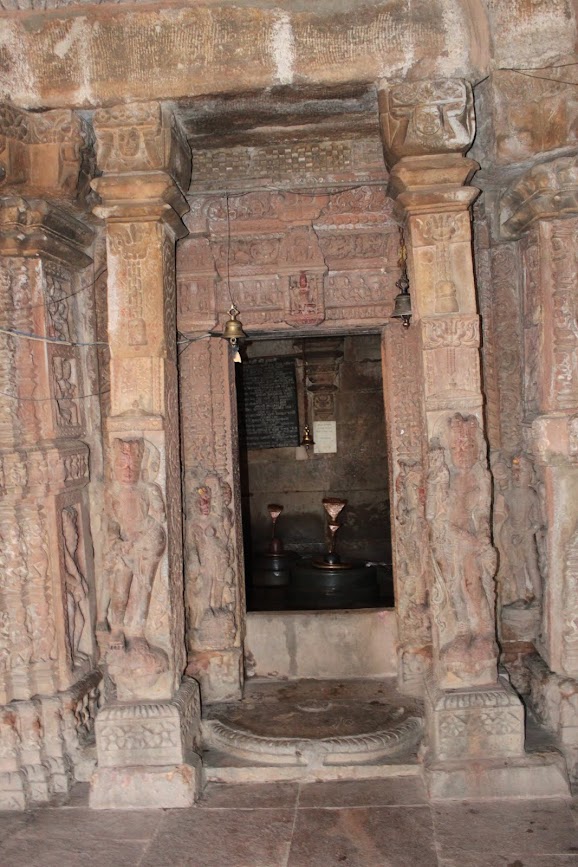 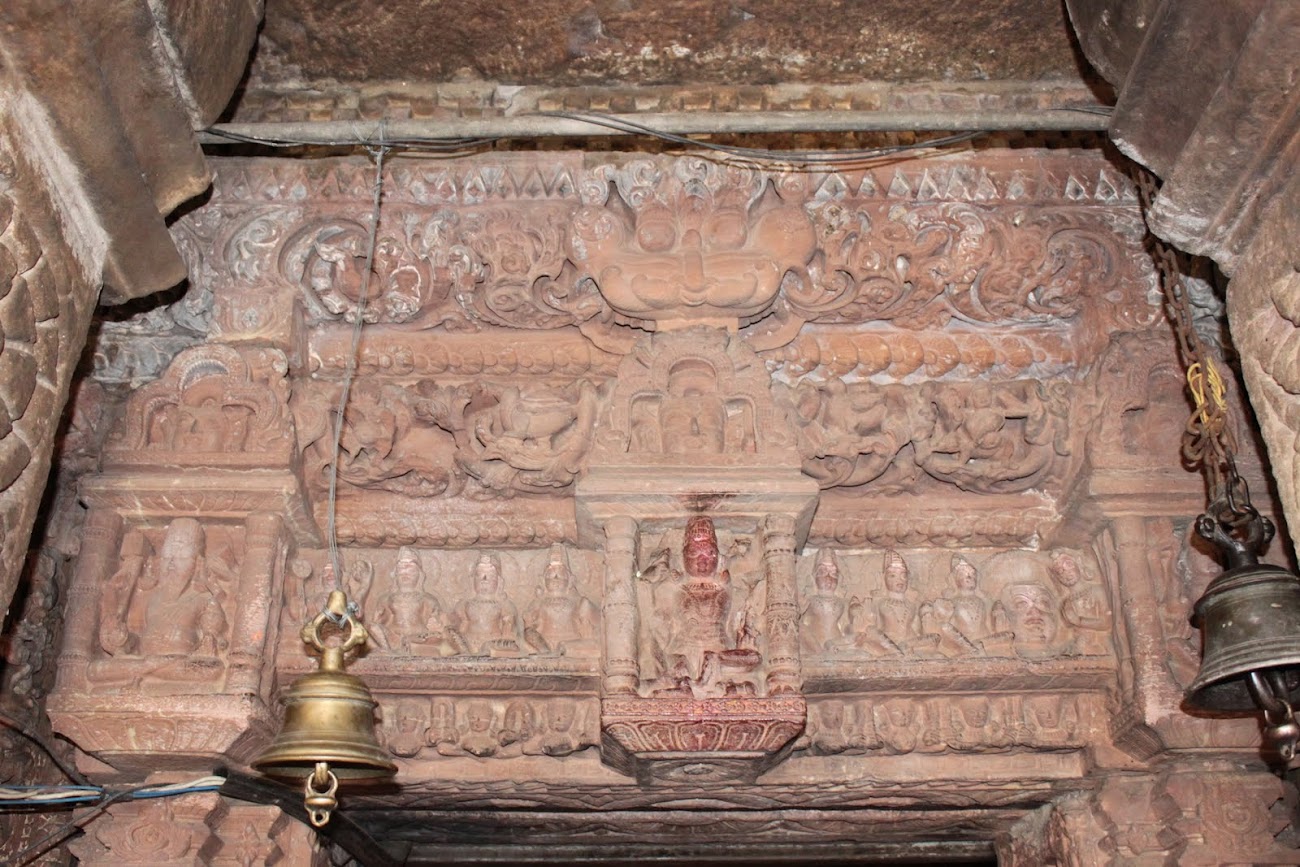 Mandapa is octagonal in shape, and was probably repaired twice, once during the Kalachuri rule of Jajalladeva and again during the Maratha rule7. As the whole temple stands over the same platform, there is doubt of mandapa would have been a later addition. The roof of the mandapa is constructed with seven concentric circles, each one reducing in its circumference moving up. With its external embellishment gone, this now gives a domical shape on the outside. The lintel of the antarala was originally supported on two side pilasters. Two additional thin pillars were added in between, probably during the repairs in the reign of Jajalladeva, to strengthen the support. The sanctum door jambs have river goddesses at the bottom, Ganga on proper right and Yamuna on proper left. Shiva is present on lalata-bimba, accompanied by nava-grhas with Brahma and Vishnu on terminals.

Antarala has two niches on each of its wall. In the upper niches, on each side, is shown Shiva with Parvati. In the lower niches are shown ascetics in standing posture. Inside the mandapa are various relief sculptures showing ascetics and royal personnel. Among these sculptures are shown a king seated on a throne, worshiping Shivalinga, an acharya teaching his disciples, ascetics in penance etc. Adhikari suggests that there may be some interrelation between these sculptures and the real life of king Jajalladeva. Shaivacharya Rudrasena was the religious preceptor of the king. These sculptures may portray the life incidences of King Jajalladeva and his guru. These may be sculpted to showcase the king’s pious life and to glorify Shaivism to his subjects. However, there are not enough supporting evidences in her argument.