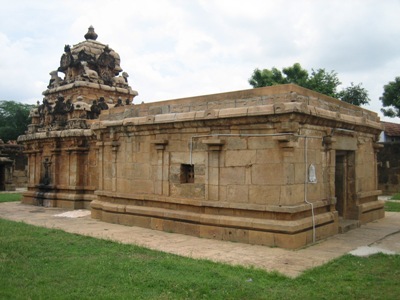 Introduction – History of Thirukkattalai region goes way back to pre-historic times as few burial sites are found around this village. It was under the Chola rulers during the medieval period of Indian history who probably built a Shiva temple here. The earliest inscription found in the temple is from the Chola ruler Adithya I (871-907 CE) and it talks about a grant made to temple. This suggests that the temple would have been constructed in early ninth century CE. The village was known as Kalkurichchi in its inscriptions and the lord is referred as Karrali-perumanadigal, Vignesvaradeva, Tirukkarrali-Alvar or just Mahadevar. The present name of the village, Thirukkattalai, seems to have been derived from Tirukkarrali. The village would have held importance as there are inscriptions from the Chola kings of the ninth century to twelfth century. However after their collapse by the Pandya-s, the temple went into oblivion as none Pandya inscription is found here. At present it has been reduced to a small village. There is great scope for studying the explanations of such transformations from large towns of the past to small villages of the present.Monuments – The only monument of antiquity is Sundaresvara Temple which was built during the early Chola rule.

Sundaresvara Temple – This east facing Shiva temple is an important example of early Chola architecture. This is constructed in parivara style where eight sub-shrines are placed surrounding a main central shrine. Various deities related to Shiva family are placed in these sub-shrines hence the term ‘parivara’ style. This style was very much in fashion during the Chola rule. This parivara arrangement is also seen at Virattanesvara temple at Tiruttani. One important feature of this temple is that all the sub-shrines have deities images inside which is a rare occurrence among the extant temples of that time.

The temple is constructed with dressed granite blocks. It consists a garbha-griha (sanctum sanctorum), antarala (vestibule), mukha-mandapa (main hall). There is a later period Nandi-mandapa and bali-pitha constructed in front of the temple. Garbha-griha is an eight feet square room. The temple has a square vimana with two tiers falling under dvi-tala category. Cornice have kudu-s (horse-shoe shaped windows) with a human heads inside. Below the cornice is bhuta-vali/gana-vali (dwarf frieze). A vyala row separates the first tier with cornice. Vyala row is extended with elephant frieze to go around mandapa. Kuta-s (square shrine) and sala-s (oblong shrines) are arranged in regular manner on the first tier. Kuta-s are placed at corners while sala-s in middle. Shikhara of these have nasika (kudu like structure) on all sides. Sala-s have gable ends which are also constructed in kudu fashion. Niches are provided below these nasika-s. Above this is second tier consisting of rising walls with pilasters. Above that is placed square griva (neck) which is topped with square shikhara. This square form of shikhara puts the temple under Nagara architectural style. Nandi-s are placed at four corners at the base of griva. Square shikhara has maha-nasika-s in middle of each side. Below these are provided niches housing images. Nandi-s face all the four directions in contrast to the arrangement at Muvar Koil where they faces only east or west.

South side of the temple has three niches, two on vimana tiers and one on the wall. Niche in the wall has Shiva as Tripurantaka. He is standing with a bow in his left hand and an ankusha (elephant goad) in his right hand. Usually Tripurantaka icon is not shown in static posture but rather in movement of destroying Tripura. Also as there is no arrow in his hands hence it is not very certain whether this is Tripurantaka icon. Uppermost vimana niche houses Shiva as Dakshinamurti where he is seated holding a veena. This Veenadhara-Dakshinamurti is a rare icon as not many such instances are found. Middle niche has Shiva as Bhikshatanamurti. He is portrayed without clothes and accompanied by a deer.

West side has Vishnu (?) in wall niche however this icon is not very clear. One article suggests that this could be Lingodbhava however I am not convinced with that statement. As a chakra (discus) like thing is visible in his right hand so this could be Vishnu. As per Chola architectural style, both Vishnu and Lingodbhava can be placed at west side. Uppermost niche has Vishnu as Varaha shown seated with his consort. However his consort is not Varahi. This is also a rare icon as not many such seated Varaha instances are found. Middle niche has Vishnu in seated posture.

North side wall niche has Brahma standing on a pedestal. Uppermost niche and middle niche also houses Brahma in seated posture. Niche in sala-s have two guardians on either side rising slightly from the base above. This kind of feature became an integral part of gopuram architecture during Pandya-s and Nayaka-s. There are other attendants in side niches of kuta-s and sala-s however as the images are blackened and not very clear so no inference can be drawn. However these images would be of some demi-gods or ganas as major deities are not expected there.

There is an important feature seen in some pilasters of this temple. Potikas (abacus) of these have rearing lions whose heads reach the bhuta-vali level below cornice. As already seen that with the Cholas, rearing lion pillar base style was not any more used. Would it be ok to say that though the lion base was done away with however this motif still retained its place above abacus. I am not sure as it’s just an inference and we should always remember that not every work found in architecture of that time was copy of something done earlier somewhere else. There must have been ingenious ideas in that time as well, why we forget this simple thing and try to always draw an influence from earlier works.

Starting from east, the first sub-shrine has Surya (Sun) image inside. Though he is shown in his regular characteristic of holding two lotuses in his two hands or riding on a chariot drawn by seven horses but a prabhavali (aura) behind his head suggests that this could be Surya. Another supports comes from Chola parivara arrangement which states that this direction, south-east, belongs to Surya. Next sub-shrine in line, in south, is for Sapta-matrikas (seven mothers). This oblong shrine shape is appropriate to house seven or nine (if accompanied with Veerbhadra and Ganesha) statues. Next sub-shrine in south-west is dedicated to Ganesha. Next shrine in west is dedicated to Subramanya. Shrine in north-west is dedicated to Jyestha. She is shown accompanied with Gomukha and a lady attendant. There is a crow, her mount, also seen on her right side. Next shrine on north is little out of place. The deity inside is probably Chandra (Moon). This place is usually for a shrine of Chandeshvara. In this temple, shrine for Chandeshvara is placed next to previous shrine. This shrine is placed at north-east axis, slightly towards north. The last shrine is not exactly a sub-shrine as its dimensions are quite large in comparison to other shrines. This large shrine is dedicated to Bhairava who is shown with four hands carrying trisula (trident) and snake. His mount, dog, is shown behind him. Usually the place of Bhairava shrine should be on north-east axis as per regular Chola parivara arrangement. I feel that as the temple has seven sub-shrines of comparable dimensions hence it is very probably that it confines to the regular arrangement of Chola style. It might be that Bhairava image was taken from that sub-shrine and placed in new bigger shrine. But if this is true then they did replacements in three shrines, sub-shrine number seven and six with bigger shrine as Chandeshvara is also not in its correct place. This makes is little difficult and less probable. Image of Bhairava is not very small to get accommodated in a smaller shrine and this makes it more less probable for suggested rearrangement at a later stage.

Inscriptions – There are few inscriptions found in this temple however no foundation inscription. The earliest one is from the Chola ruler Aditya I (871-907 CE) who allowed certain grants to the temple. This place is referred as Thiruk-karrali meaning ‘the sacred stone temple’ and as Karkurichchi in inscriptions. Inscriptions in detail are given below:

How to Reach – This village is about 15 km from Pudukkottai. I am not sure which particular road it was as I was traveling in a taxi and forgot to write down directions, however I am very sure that this place was not very far from Pudukkottai and local enquiry at the town will help in finding appropriate directions.