Skip to content
Introduction – Singaperumal is a well known town located near Chenglepattu en-route to Chennai on NH45. This town is quite famous for its Singaperumal koil (temple), which is originally a cave temple and later extended with gopurams and mandapas. As per an inscription, this temple is referred as Narasinga-Vinnagaram, situated in Sengunram and Sengunra-nadu.

Cave Temple – Locally known as Pataladri Narasimha temple, originally this temple is a cave temple. In later time, it has been extended with mandapas and gopurams. With the extensions, the current main entrance faces south. The eastern face of the cave is carved into a mandapa supported on two pillars and two pilasters. The pillars are in characteristic Mahendra style, differentiated with saduram (cubical part) and kattu (octagonal part) while the pilasters are tetragonal throughout. The corbel above the pillars are in angular profile. We do not see two-bay design here, as there is only one row of pillars. In the center of the back wall, a cell has been scooped out with a mandapa in front of it. Inside this cell is an image of Narasimha, executed in stucco. 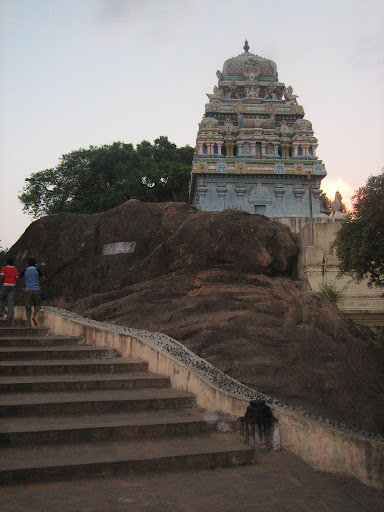 Main deity of the shrine – As per a legend in Brahmanda Purana, sage Jabali requested Lord Narasimha to give him darshanam after the destruction of demon Hiranyakashipu. As the Lord appeared after the destruction, so it is believed that he is in ugra (extreme) appearance. The name of the temple, Pataladri also gives similar expression, Patal means red and adri means hill. The image is made in stucco, however it seems that this is not done over some bas-relief. Narasimha is shown with four hands. Upper right hand is holding chakra (discus) and upper left hand sankha (conch). Lower right hand is in abhaya mudra and lower left hand is resting on his thigh near his waist. An interesting feature of the image is his third eye. Usually we associate third eye with Shiva and this third eye is considered to have destructive qualities. As Shiva is responsible for destruction, among the Hindu Trinity, which is possibly achieved using his third eye. In that case, how come Narasimha, a half man-half lion incarnation of Vishnu, is having a third eye? How about associating this with Hari-Hara icon? Hari-Hara icon represents a combined form with features of Hari (Vishnu) and Hara (Shiva). Here, at Singaperumal, we also see Narasimha having features of Vishnu, as he himself is an incarnation of Vishnu, and features of Shiva, the third eye, as well. What you say? Isn’t it a unique representation of Hari-Hara!

Dvarapalas of the cave – There are no dvarpalas in the original cave.

Assignment of the cave – To whom we can associate this cave temple. We know that this area was under Pallavas till they were defeated by the Cholas in early tenth century CE. We found inscriptions of the Chola king of about 990 CE however these inscription are not foundation inscription but donations to support the temple. Hence this temple was already in existence during the Cholas. In such circumstances, this would have been creation of some Pallava ruler or their vassal. An image on back wall, of Narasimha, was the first such occurrence among cave temples of Mahendra. Hence we may say that this is a later creation but whom? We have two rulers after Mahendra to whom we may try to assign this cave, first is his successor Narasimhavarman I Mamalla and other is successor of Narasimhavarman I Mamalla, Parameshvaravarman I. This cave should not be assigned to Parameshvaravarman I as he was a staunch Shaiva as per inscriptions. In that case it could be a creation in the time of Narasimhavarman I. As that Pallava ruler took the coronation name of Narasimhavarman, why will there be not a temple to signify the title and show respect to the lord Narasimha. Though we do not have any Pallava inscription in this cave, however in many cave temples of Mahabalipuram are also without inscriptions and many of those are attributed to Narasimhavarman I. Singaperumal seems of be one of earliest creation of the time of this ruler. G Jouveau-Dubreuil when visited this temple, he assigned this to Pallavas on first cursory look itself, as the resemblance with other Pallava shrines is very clear. At his time, the inscriptions were not read and copied so he was of the opinion that we might get some Pallava inscription from this temple. However till now, we do not have any Pallava inscription from this cave. However it is believed that there are few inscriptions in this cave which are not yet read, but how much truth is in this is not very clear.

Inscription in the cave – There are two inscriptions found in this cave. One is on the front top face of northern pillar and another is on southern pillar. The former is very clear, however the later is obscured with the side cross wall. The first inscription (ARE 1956-57 – No 137 Right Pillar Top), probably in the fifth year of tha reign of the Chola king Rajakesari (Rajaraja the Great) (990 CE), talks about the donation of twenty-six sheep for maintenance of Alvar Narasinga Vinnagar Deva of Sengundram in Kalathur Kottam by some person named Senda-kutti son of Vairam.
The later inscription (ARE 1956-57 – No 139 Left Pillar Top) is from the eight year of the reign of tha same ruler Chola Rajakesari (993 CE), talks about the registration of gift of land, purchased from Chengundram nattar in Sengundram, by Ayyara Nakkan, who was a kuli Chevagan to maintain two lamps in the temple and offer food to Narasinga Vinnagar Alvar. The Chola emblem also has two lamps in it, hence these two lamps in the temple probably symbolizes the lamps in Chola royal emblem.
There is another very important inscription (ARE 1119-20 no 481), found rock behind the Andal shrine, as this inscription was engraved during the reign of the Chola king Rajaraja in his eight year of reign (993 CE). This inscription refers the temple as Narasinga-Vinnagaram.
An another damaged an incomplete inscription (ARE 1956-57 No 138) is found on the lower portion of the right pillar. This also records some kind of donation made by king or king’s men. This inscription is probably from 11th century CE and refers to land in Mullaipadi …nga chchani mangalam and chittamanur.


How to Reach – Singaperumal town is located on NH 45, Chennai-Trichy route. It is about 45 km from Chennai. This is well connected with Chennai and Trichy via road. There is a small railway station also in this town. Photography of the main cave is not permitted without prior permission, which is not so easy to obtain as the temple is in worship.