Introduction – Mahendravadi is a small village situated near to Sholingur railway station. Its old name seems to be Mahendrapura, which suggests that perhaps this village was founded by Pallava king Mahendravarman I (600-630 CE). Though not much history is known about this place, however one important reference is found in ‘Manual of the North Arcot District (second edition, Vol. II)’ where a mention of a large tank is seen. It says, “a fine tank, the date of the construction of which is unknown. It was once a large town, and 3 miles east of it is Kilvidi, so called because it originally formed the eastern street of Mahendravadi. Not far from the tank are the traces of fort walls, and within the enclosure a small temple excavated out of a large boulder. The tank must originally have been larger than that of Kaveripakkam, and served lands some 7 or 8 miles distant. The bund was enormously high, and might be restored to its original height, in which case a great extent of land could be brought under irrigation.” From this statement it seems clear that this village held quite an importance in old times. One thing which has always interested me is that most of the Pallava cave temples are in small villages, which is little strange. As a king or a ruler, you would construct your monuments at the places which are quite important in your kingdom or to your subjects. If this hypothesis is correct, then Mahendravadi must have been an important place during the time of Mahendravarman. This theory is supported by the mention of a quite large tank in the memoirs of the district. Mention of the remains of a fort suggests that this village could have been quite an important town, probably near the boundary of the kingdom. However whether that mentioned fort was made during the time of the Pallavas or not, is not very certain. However from the inscription of Mahendravarman, it is clear that he constructed a tank in this village, which might be the same tank which the memoirs of the district mentioned. However the tank would have received quite a few extensions in later times as suggested from its quite a large size. It would be very interesting to find out that a very important village of that time, did not evolve into a great city, but has gone into oblivion almost.

Cave Temple – This is a very important cave temple, constructed by Mahendravarman I, as this is the only cave temple which is dedicated to Vishnu. When I said constructed by Mahendravarman, I meant where we find inscription of his. There are many other cave temples which resembles the style used during Mahendravarman’s time, however they do not carry inscriptions of that ruler. We may associate these caves to Mahendra however it will be solely on the basis of similar architectural style. Let’s go to the cave temple directly. This cave is excavated on a free standing boulder which is about 11 feet long and 25 feet wide from north to south. The eastern face of this boulder is been cut and excavated into a cave. The front façade of the cave is supported on two pillars and two pilasters. Like other caves, Mandagapattu, Dalavanur etc, the pillars of this cave are also cubical on top and bottom with an octagonal intermediate portion. The upper cubical face of the pillars are carved with lotus medallion on all four sides. Lotus medallion on lower cubical face are not completely carved, in comparison to the upper cubical part. Like many other cave temples of Mahendra, this cave is also consisting of two rows of pillars and pilasters, hence constituting mukha-mandapa between the front and back row of pillars and ardha-mandapa between back row and the hind wall. The pillars of the back row do not have lotus medallions on their cubical parts. It seems that decoration was done only on front pillars, just same as we decorate our front portions of houses as that is the first part which is seen by anyone when they enter into house. Above the pillars, the corbel are carved in similar manner as seen in earlier discussed cave temples.

A shrine is carved at the back wall of the cave. This 11 feet long cell is projecting about 1.25 feet into the ardha-mandapa. At the entrance of the shrine are two dvarpalas, on either side of the entrance. Interestingly, these two dvarpalas seems to be standing in posture, which looks like that they are turned away from the shrine. We will discuss more about them in detail later in the article.
Inside the shrine is placed an image of Narasimha, which seems to have been placed quite later after the excavation of the cave. On the back wall of the shrine are some remains of the color which suggests that initially the image of the god was in paint, perhaps on a stucco. There is a kind of platform carved on the back wall, protruding little forward. Perhaps this was used to place the brass or wooden image of the god, while the painting was on the back wall. The current Narasimha image is in stone, depicting yoga-Narasimha sitting in yogasana. The execution and style of the image is no way comparable with style during Pallava or any later contemporary dynasty.

Dvarapalas of the shrine – There are two dvarpalas on either side of the entrance of the main cell. Shown without clubs, supporting the inscription that this cave was dedicated to Vishnu. Both are shown in very similar profile, standing in tribhanga posture. Both the hands are resting on their waists. Proper right dvarpala is very much worn out, however other one is much clearer. In ornaments, they are shown wearing patra-kundala, necklace, mukuta and yajnopavita. The posture in which they are shown standing cannot be held for a long time, as there is no support to keep such a posture. Does this the depiction of a snapshot of a movement, if yes then this might be one of the first such depiction. Though it is not much elaborated, however this seems like a snapshot of a movement.

Inscription – The inscription, on the southern pilaster, is inscribed in Pallava Grantha script in Sanskrit language. The Sanskrit text of the inscription is given below, with English text below that 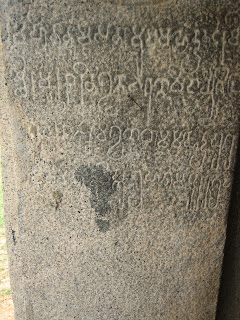 Translation – Splitting the rock, Gunabhara caused to be made on (the bank of) the Mahendra-tataka (tank) in the great (city of) Mahendrapura this solid, spacious temple of Murari (Vishnu), named Mahendra-Vishnugriha, which is highly praised by good people, (and which is) an abode of beauty pleasing the eyes of men.

Points to Ponder –
1.    As per Trichy inscription, Mahendravarman stated that he came back to worship of lingam from some other hostile faith. This hostile faith is taken as Jaina, as Appar is seen responsible for converting Mahendra to Shaiva faith. In his poems, Appar, has mentioned the tortures he received from a Jaina king, whom he later converted into Shaiva faith. If this is accepted, then as a newly converted person, Mahendra should have dedicated his shrines to Shiva. Contrary to this, he dedicated first cave temple at Mandagapattu to Hindu Trinity, and this cave temple at Mahendravadi is dedicated to Vishnu. Most of his other temples are dedicated to Shiva. Was Mahendra converted after the excavation of these early cave temples? If this is correct then Mahendra was already a follower of Vedic religion and later became Shaiva. Can Vedic faith be considered as hostile faith in comparison of Shaiva? I am not sure whether in early seventh century, there was a distinct separation line between Shiava and Vaishnava. K R Srinivasan states that though Mahendra became a Shaiva however he had soft corner for Vedic faith, hence his cave shrines are dedicated to other gods of Vedic faith as well. I do not agree fully with this, even if Mahendra may be a considerate ruler towards all religion, but when a person constructs a new shrine, he would surely like to dedicate it to the faith which he follows.