Introduction – It will not be incorrect if I say that we do not have any Hindu temple survived which can be assigned to a period before fifth century. We have Gupta temples in North India which can be assigned to fifth century. We have many foreign invasion sin North India from earlier times so if we say that all the earlier temples were destroyed in those attacks, it may seem quite possible. However South India have not faced those earlier invasions, and in that case we must have some earlier temples in this region. However, the situation in South India is also similar to that of North India. Hence we drop the invasion theory as the only factor of missing early temples. Another theory, which is widely accepted, that none of the ancient temple has survived, is that the earlier temples were made of wood or other similar perishable materials. This is supported by the architecture of earliest survived monuments, as these resemble a lot with the wooden architecture.

It is not that Indian kings or architects were not aware of this situation, hence they must have thought to somehow solve this so that their creations may come down to the ages of their descendants. Mauryan King, Ashoka The Great, did think in this direction and carved out some monasteries in the rock for Buddhist monks. However these creation were more towards domestic purpose but not for the purpose of common worship place. In Deccan, middle part of India, we see few of such creations which can be dated before fifth century. However it took some time for South India to start in the similar direction, using stone/rock for creation of their shrines. The first such instance of this architecture can be seen at Badami, constructed during Chalukya regime. In Tamilnadu, it was Pallava king Mahendravarman I who started construction in this direction.

Cave Temple – Mandagapattu is a very important shrine and holds a considerable position in the history of architecture of South India and of the Pallavas. An inscription found in the shrine tells us that this is the first cave temple created by Pallava king Mahendravarman I, in Tamilnadu region. We will talk about this inscription later in the article, for now we discuss about the cave and its details. This north facing cave shrine has two pillars and two pilasters in its front façade, thus forming three bays. It is 22 feet in length, 24 feet in width and 9 feet in height. The front façade is very simple, having no kudus and mini shrines above the cornice. Beyond the pilasters, on either end, are carved two dvarpalas. The cave extends beyond these pilasters, and forms a niche kind of structure around the dvarpalas and ending with tetragonal pilasters on each end. Hence the two pilasters, before the dvarpalas, are almost like pillars. The base and top section of the pillar is in form of a cube. In Shilpa-sastra, this part is called saduram. In between these section, there is an octagonal section. This in-between section is called as kattu as per shilpa-sastra. Behind the first front row of pillars, there is another row of two pillars and pilasters. Thus the first part, in between the two rows of the pillars forms mukha-mandpa and the part behind the second row of pillars forms ardha-mandapa. The pilasters of the second row are tetragonal in design. The back wall also has four pilasters, corresponding to the arrangement as in first and second row. Out of these four pilasters, middle two are same as the pillars of the first and second row, and the corner pilasters are similar to the pilasters of the second row. These four pilasters on back wall forms three cells, each 3 feet deep, one for each in Hindu Trinity, Brahma, Vishnu and Shiva. There are few traces of painting seen on the back walls of the cells suggesting worship of painted deities. There are sockets in the floor inside the cells, which suggests that the statutes of the deities would have been fitted into these.

Dvarpalas – There are two dvarpalas carved into the front façade. The dvarpala on eastern end is shown in tribhanga posture, though it is not exactly how a tribhanga should be, what I meant is that it is shown in quite a bent attitude. His right hand is going all across the waist and under his left arm armpits over the handle of the club. The club handle is almost into his left arm armpits. He is shown wearing a long kirita-makuta (jewel crown) and huge jata-bhara (hairdo) behind  his head. Also wearing large patra-kundala (earrings), a necklace in his neck and a yajnopavita across his body. His left leg is bent and not fully carved. The space between the bent leg and the ground is quite large if artists were thinking to cave his foot here. It might be that they would have planned some raised platform on which his foot would have been rested. His left hand is dangling around the club. The club is not carved out fully. If you carefully see then you will find that there is not much space left to carve out a club, which suggests that the niche was carved before and dvarpalas were taken afterwards.

The dvarpala on western end is shown standing in proper tribhanga over the support of his club. He is also shown wearing long kirita-makuta and jata-bhara behind his head. There is a snake behind his head and another snake is twirling around the club. Though the eastern dvarpala does not shown any protruding trisula prongs behind his head, however the western one shows a protruding axe end on his makuta. This suggests it to be dvarpala of Shiva, however the cave was dedicated to the Trinity. For this reason perhaps, the other dvarpala does not show the trisula prongs. His one arm is resting over the handle of the club and another arm is on his waist (katyavalambita). Both the dvarpalas are facing towards the viewer in front, with slight inclination towards the cave. K R Srinivasan writes that both the dvarpalas have ferocious looks, however to me they look quite ok, instead I can detect a slight smile in eastern dvarpala. 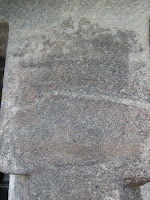 Translation – This brick-less, timber-less, metal-less and mortar-less temple, Lakshita-yatna, which is mansion for the Brahma, Ishvara and Vishnu was caused to be made by the king Vicitra-cita.
Though the inscription does not states clearly whether this is first of its kind, however the enthusiasm of the king and mention of brick, timber, metal and mortal specifically in the inscription suggests that this is probably the first attempt in this direction hence the creator was overwhelmed at the success and inscribed such words over the pillar.

How to Reach – Mandagapattu is located about 20 km from Viluppuram and 17 km from Gingee and comes under Viluppuram district. From Chennai it would be around 162 km. This is a small village hence you might get proper and regular transport, so arrange a taxi from whichever town you plan to visit here.The nearest railway head is Viluppuram and nearest airport is Chennai.